Accessibility links
Israel Could See Lowest Voter Turnout in 20 Years The day before the Israeli election, more than 20 percent of the public haven't decided who to vote for. A lackluster campaign has failed to energize the public, and voter turnout may be the lowest in 20 years. But a new force in the election, Russian-born Avigdor Lieberman, could change the political landscape.

The day before the Israeli election, more than 20 percent of the public haven't decided who to vote for. A lackluster campaign has failed to energize the public, and voter turnout may be the lowest in 20 years. But a new force in the election, Russian-born Avigdor Lieberman, could change the political landscape. 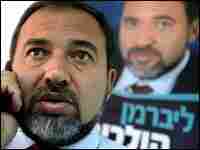 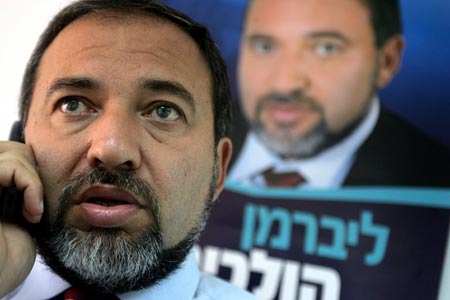 Avigdor Lieberman, leader of Yisrael Beitenu (Israel Our Home), the far right-wing party based among immigrants from the former Soviet Union, in his Jerusalem office, March 26, 2006.

Israeli elections take place tomorrow. Polls show up to 20 percent of voters still have not decided who to support. The centrist Kadima Party, founded by Ariel Sharon, remains the front-runner, but it's slipped a bit in the latest polls. One other new force in the campaign, the party of hard-liner Avigdor Lieberman. It could become one of Israel's largest political parties. NPR's Linda Gradstein reports.

At a grocery store in southern Jerusalem, pickles and vodka imported from Russia line the shelves. The meat case is full of non-kosher pork products and most of the customers are Russian speakers. There are more than a million immigrants from the former Soviet Union in Israel and their support can make or break an Israeli candidate.

Ruselana Alberpinos(ph), who moved to Israel 12 years ago from Ukraine, say that until Prime Minister Ariel Sharon's massive stroke in January she had planned to vote his centrist Kadima Party, but she's not impressed with Sharon's successor, former Jerusalem Mayor Ehud Olmert. So she's now torn between the Likud Party and the hard-line Israel Beytenu, headed by Avigdor Lieberman.

GRADSTEIN: He's done a lot and he proved himself when he was the Minister of Industry, she says of Lieberman. But maybe he won't be strong enough. Lieve Butevski(ph), who came to Israel from Leningrad 15 years ago says he's one of the few Russian immigrants who's voting for the dovish Labor Party. Most immigrants, he says, reject both Socialism and any concessions to the Palestinians. And many, he says, are impressed with Lieberman, who emigrated from Moldova and speaks fluent Russian.

Mr. LIEVE BUTEVSKI (Resident, Israel): The idea of strong hands is very attractive for ideas of such people.

GRADSTEIN: A strong hand against both terrorism and crime is what Lieberman offers the Israeli public. One of his TV campaign ads gives statistics on growing crime in Israel. Burglaries are up 67 percent, murder by more than 50 percent, robberies up more than 130 percent.

ANNOUNCER: (Through Translator) Israelis are afraid to leave their houses and they live in fear. This has to stop.

GRADSTEIN: Then the burley Lieberman, who once worked as a bar bouncer, speaks.

GRADSTEIN: I have a detailed plan to put crime behind bars, he says, to leave the criminals in jail. Then come pictures of Kadima head Ehud Olmert and Likud leader Benjamin Netanyahu.

GRADSTEIN: The 48-year-old Lieberman has his own plan for solving the Israeli/Palestinian conflict. He wants to redraw Israel's map by transferring large Israeli Arab towns to Palestinian jurisdiction, and annexing large Jewish settlements in the West Bank to Israel.

Under Lieberman's plan if Israeli Arabs want to remain Israeli citizens they would have to move from their towns. He also says every Arab should be required to take a loyalty oath to Israel. Israeli Arab leaders and some Jewish politicians have denounced Lieberman's ideas as racist. Isaac Herzog, a former Cabinet Minister from the Labor party, says Lieberman's ideas are unacceptable.

Mr. ISAAC HERZOG (Former Cabinet Minister, Labour Party): We despise some of his proposals. We disagree with his proposal regarding territorial changes with the Arab community in Israel. We feel it has racist undertones and we disagree with it.

GRADSTEIN: Latest polls show Lieberman's party with 10 to 12 seats in the 120 seat parliament, just behind Netanyahu's Likud. One poll even had Lieberman passing Likud to become Israel's third largest party after Kadima and Labor.