Accessibility links
Legal Cloud Hangs over Getty's Art Collection The Getty Villa, which houses the Getty's collection of Roman, Greek and Etruscan art, reopened in Malibu after a renovation. The villa has a legal cloud hanging over some items in the collection, and former curator Marion True is on trial in Italy for her role in what the Italians claim are stolen items.

The Getty Villa, which houses the Getty's collection of Roman, Greek and Etruscan art, reopened in Malibu after a renovation. The villa has a legal cloud hanging over some items in the collection, and former curator Marion True is on trial in Italy for her role in what the Italians claim are stolen items. 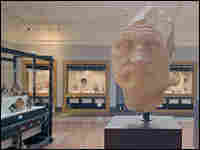 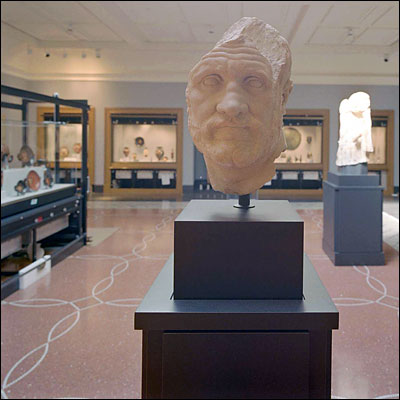 Men in Antiquity gallery in the J. Paul Getty Museum at the Getty Villa in Malibu, Calif.

Hear Part 1 of the Series

From NPR News this is ALL THINGS CONSIDERED. I'm Michele Norris.

And I'm Melissa Block. The buying and selling of antiquities has a long and shady history. Museums around the world have built collections of objects that may or may not have been obtained legally. Now Italy is calling for change and perhaps no major American museum has been so adversely affected as the Getty. The Getty Villa in Malibu, California has just reopened after a decade of renovations, and its former antiquities curator, Marion True, is on trial in Rome. Here's NPR's Lynn Neary.

The Getty Villa in Malibu was to be the jewel in the crown of Marion True's career. Sitting high on a hillside overlooking the Pacific Ocean, it is the showcase for some 1,200 objects from the Getty's extensive antiquities collection. But True is no longer the Getty's antiquities curator. She was forced to resign because of a questionable real estate loan from a prominent donor. Even so, Michael Brant, director of the Getty Museum, says the Getty is footing the legal bill for her trial in Rome.

Mr. MICHAEL BRANT (Director, Getty Museum): Clearly the Italian government and other governments are sending a message, and I think it's an unfortunate message to pick on one individual curator, but that has happened.

NEARY: Carol White who once worked for True and considers her a mentor, now presides over the Villa, taking visitors on a tour that begins in the open courtyard.

Ms. CAROL WHITE (Getty Museum): There's some of our parrots going by.

Ms. WHITE: We have a resident flock of wild parrots that fly through occasionally.

NEARY: A long fountain lined with bronze statues and surrounded by a manicured garden runs through the middle of the courtyard. The entire building is a replica of an ancient Roman villa.

Ms. WHITE: Well Mr. Getty made a very conscious decision when he decided to build this building this way and have it look this way. He really wanted to show off the antiquities collection to its best effect in an environment that would really evoke the ancient world.

NEARY: The exhibition galleries line the courtyard and a hallway on the second floor. Organized according to different themes, they are filled with amazing objects from the past. Statues of athletes, vases depicting scenes from The Odyssey. Images of actors on the God Dionysus. Looking at these ancient glories, it's hard not to wonder what, if anything, is under dispute by the Italian government.

Now I have to ask and I know you don't really want to talk about it but have we passed any of the objects in question yet? Are there any in this room for instance?

NEARY: Her voice barely audible, White reluctantly points to a small bowl. A wine cup used by athletes, it is one of the 52 objects whose origins the Italian government is questioning.

Mr. JOHN WALSH (Former Director of Getty Museum): In one sense everything is questionable, and in another sense only a tiny proportion is.

NEARY: John Walsh was director of the Getty Museum from 1983 until 2000. Many of the antiquities now on exhibit were collected during his tenure.

Mr. WALSH: If questionable means did objects get dug up somewhere, sometime illicitly, the answer is most of the material in our museum as well as every other American museum, belongs in that category.

NEARY: For hundreds of years, Walsh says, there were no laws governing the buying and selling of antiquities. When laws were first passed in the 20th Century, they were not well enforced. But things began to change and in 1995 the Getty, under the leadership of Marion True, put a tougher policy into place. Walsh says it is the items bought before then that may be subject to dispute.

Mr. WALSH: Between 1983 and 1995 we bought a lot of material whose origin we frankly simply don't know in any detail. And it is vulnerable in the sense that information may well come to light that identifies it.

NEARY: The Getty museum's current president, Michael Brand, says they're in the process of trying to identify where the objects in question came from. Brand, who has already met with Italian officials, says there are a number of ways to resolve the dispute that would not necessarily require returning questionable objects.

MICHAEL BRAND (President, Getty Museum): Long-term loans, exchanges of objects, plus possibly even joint-ownership. You know, partnerships between the Getty Museum and institutions in Italy or Greece or Turkey or Sicily, anywhere.

NEARY: The Getty, given its size and wealth, was an easy target says Selma Holo, Director of the Museum Institute at the University of Southern California. But Holo says the trial of Marion True is a catalyst for everyone involved in the antiquities market to begin an honest discussion of the issues.

Ms. SELMA HOLO (Director, Museum Institute at University of Southern California): This is a big problem in which the source-rich countries are as involved as the buying countries. That has to be recognized.

NEARY: The way people have been doing business for centuries has to change, says Holo, because the problem is not going away.

Ms. HOLO: I believe we're going to see more and more of this claiming of works of art. How it's played out and how we respond to it in the future is going to be very important because works of art are symbolic.

NEARY: As far as the Getty is concerned, Michael Brand says the museum is eager to resolve all the issues surrounding their antiquities collection.

Mr. BRANT: I'm not naive enough to think that they're going to be, you know, very, very easy to resolve, or they'll all be resolved immediately. But resolving that situation is very, very important for the Getty itself. It will be a very defining moment for us when we can say that issue is behind us.

NEARY: In the meantime tourists flock to the Getty Villa to view the antiquities collection in a magnificent setting. Some may wonder, but may never know, which objects on display are at the heart of one of the biggest international art controversies ever.