Accessibility links
Hughes: No Short-Term Fix for U.S. Image Abroad The person in charge of improving the U.S. image abroad is not expecting it to get much better soon. Karen Hughes says her efforts are part of a "long-term program."

Only Available in Archive Formats.
Hughes: No Short-Term Fix for U.S. Image Abroad 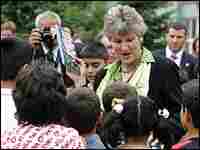 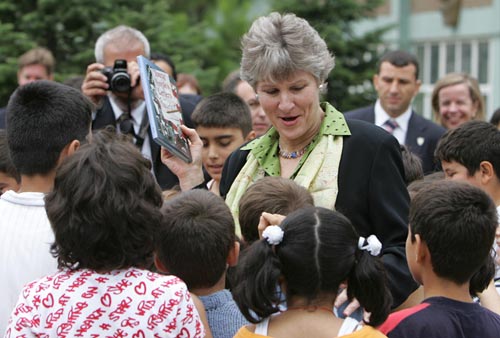 The person in charge of improving the U.S. image abroad is not expecting it to get much better soon. Karen Hughes, undersecretary of state for public diplomacy, says her efforts are part of a "long-term program."

"This is not something that I expect will change probably much in... the less than three years we have left in the Bush administration," the longtime adviser to President Bush says. "What I'm trying to do is put in place a foundation."

More From the Interview

Hughes on Measuring Success of Improving the U.S. Image Abroad

Hughes About Having U.S. Officials Appear on Al-Jazeera and Other Arab-Language Networks

But just as importantly, she says, her department has been doing a lot of listening, including meeting with exchange students. She recalls a group of Fulbright scholars who were "very concerned about their treatment when they arrive in our country. And I've been very worried about that. I think it's very important that America remain a welcoming country."

But searches and other strict security measures at airports can be very unwelcoming.

"One of the things I'm working on is to better explain to people what to expect in today's security environment," Hughes says. She says she is working with the Department of Homeland Security on the issue.

The Middle East conflict is another key issue.

"One of the things that I heard as I traveled throughout the Middle East is concern about the Israeli-Palestinian policy. I came back from my first trip and relayed to both the secretary (of State) and the president that, to the extent that we could be seen as visibly working to improve life for the Palestinian people," which would improve the U.S. image across the world.

Reports about the treatment of detainees in Iraq and Guantanamo Bay have also been "very difficult" for Hughes' efforts, she says.

"Those pictures from Abu Ghraib were horrible," she says. "I would hope that people should look at them for what they are, which is crimes."

"One of my frustrations as a communicator is that a lot of times people don't even know what we've done."

In one example, Hughes says, "We've doubled development assistance to Latin America during President Bush's administration and not one leader I met with during a trip to the region knew that."