Accessibility links
Pretty in Pink: Rediscovering Rhubarb Rhubarb is more than a pie. It is showing up in soups, stews and other savory dishes where its natural sourness makes a nice counterbalance to the richness or sweetness of other ingredients. Bonny Wolf shares two recipes for new ways to use grandma's old standby. 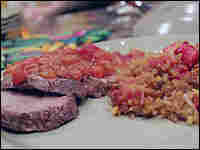 Not your grandmother's rhubarb: The celery-like vegetable is good for more than just pies. Recipes below for roast pork with rhubarb chutney and scalloped rhubarb. David S. Deutsch hide caption 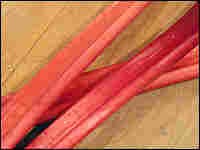 Make sure only to eat the rhubarb stalks: The leaves are toxic. David S. Deutsch hide caption

Anyone with a Midwestern grandmother knows rhubarb. She grew it. She put it in pies, probably with strawberries … and custard.

But rhubarb is more than a pie. The celery-like vegetable is showing up in soups, stews and other savory dishes where its natural sourness makes a nice counterbalance to the richness or sweetness of other ingredients.

Restaurants serve foie gras with rhubarb puree. Game, quail and duck often are paired with rhubarb, as these stronger-tasting meats can stand up to the tartness.

In his book An American Place, chef Larry Forgione, one of the leaders of new American cooking, includes a recipe for grilled spring lamb with rhubarb and dandelion that he calls "a spring celebration." The rhubarb is blanched in a sugar water to slightly sweeten it to blend with bitter greens. Chef and cooking teacher Madeleine Kamman says rhubarb makes an excellent fish sauce because of its acidity.

Rhubarb has been around for about 4,000 years, but only as a food for the last few hundred. The English first saw rhubarb's food potential, and rhubarb pie is to England what apple pie is to America.

Unlike apples, however, rhubarb was left behind by food fashion. But it's making a comeback. In England, rhubarb is enjoying a major revival as celebrity chefs tout it as a super-food -- high in nutrition and low in calories. Rhubarb is low in the dreaded carbohydrate, high in vitamin C, fiber and potassium. It is said to speed up metabolism and aid weight loss.

This is not the first time in history rhubarb has been seen as a miracle plant. Native to Northern Asia, rhubarb was used for centuries for medicinal purposes: as a gentle purgative, to reduce fevers and to alleviate the plague. It can also be used to clean pots, dye hair and as an insecticide.

Rhubarb wasn't really known in the United States before the early 1800s, but caught on quickly. Pioneer women smuggled rhubarb cuttings across the plains, even though they were not supposed to take anything worth less than a dollar a pound because of the crowded covered-wagon conditions. But this worthless eastern plant became priceless in the monotonous wilderness diet.

Because of its use in pies and jams, rhubarb, which is also called pieplant, is thought of as a fruit. Botanically, however, it is a vegetable: a member of the buckwheat family and a close relative of garden sorrel.

Only the stalks of rhubarb, which look like big red celery, are eaten. The leaves are toxic. So unless you're trying to square accounts, toss them in the garbage.

In a time when people chatted over the fence rather than the Internet, backyards had rhubarb patches. The big, old-fashioned plant with its huge ruffled green leaves is easy to grow and it's extremely hardy. The same roots produce rhubarb for up to 15 years.

Fewer contemporary yards have rhubarb patches, but there is a big commercial industry -- mostly in the Pacific Northwest and Michigan -- to supply the demand. This astringent perennial does especially well in northern climates, and is available from early winter through early summer with a peak from April to June.

And as they say on radio's A Prairie Home Companion: "Rhubarb pie is the secret of the good life. A taste of springtime."

Put all ingredients in medium, heavy saucepan. Bring to a bowl then lower heat and simmer until rhubarb is tender, 20-30 minutes. Serve warm or at room temperature. (Chutney can be made up to three days ahead.)

Place pork in a shallow pan. Mix together all other ingredients in a small bowl and pour over pork. Marinate at room temperature, basting frequently, for an hour. Cook under preheated broiler, 7-8 minutes per side. Remove from oven and let sit for 10 minutes before slicing.

Put a little chutney on pork slices and pass the rest separately.

This recipe is adapted from Cold-Weather Cooking by Sarah Leah Chase (Workman Publishing Co. 1990). She suggests serving it with roast spring chicken.

Preheat the oven to 325 degrees. Butter a 10- or 12-inch gratin dish or shallow casserole.

In a large mixing bowl, toss together the rhubarb and the sugar.

Melt 2 tablespoons of the butter in a medium skillet over medium-high heat. Add the onion and saute until quite soft, 10-15 minutes. Remove the onion from the skillet and combine with the rhubarb. Melt the remaining 6 tablespoons butter in the skillet and add it to the rhubarb mixture along with the cornbread crumbs and walnuts. Stir to combine well.

Spread the mixture in the prepared dish. Drizzle the cassis evenly over the top. Bake until the rhubarb juices are bubbling and the crumbs are lightly browned, 40-45 minutes. Serve immediately.