Accessibility links
The Little Coffee Plant that Wouldn't Die : Krulwich Wonders... Rodrigues island's "cafe marron" plant has been presumed extinct for scores of years. Then, one day, a little boy told his teacher that the plant lived, near his house. Suddenly, an obscure, skinny little bush that nobody had noticed became an international treasure and the focus of a 20-year effort to preserve it. 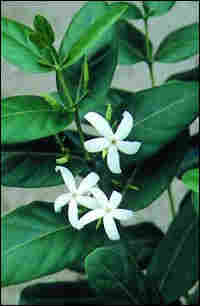 Kew's cafe marron plant, which is a clone of the plant on Rodrigues island. RBG Kew hide caption 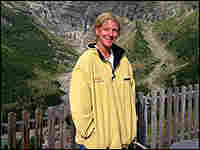 Plant expert Wendy Strahm took two clippings from the Rodrigues plant and sent them straight to Kew Royal Botanical Gardens in London, where experts would try to get it to grow and seed. Denis Landenbergue hide caption

This is the story of a wild coffee plant that disappeared. Almost.

Called "cafe marron," it lived on one island, Rodrigues, in the middle of the Indian Ocean in what is now part of Mauritius. As plants go, it was nothing special. Its leaves were green, its height average (about 5 or 6 feet), its flower white, its existence ignorable.

In 1877, a European visitor, passing through Rodrigues, made a drawing of it and that is the only image we had of this plant, because after that, goats and pigs began to multiply on Rodrigues, and the plant began to disappear. By mid-century, it was presumed to be extinct.

Then in 1979, a biology teacher on Rodrigues handed out copies of that 1877 drawing to a group of 12-year-olds, and one of the boys raised his hand and said, "Please, sir, I've got one near my house."

The teacher was dubious, but he took a sample branch, sent it to the Royal Botanical Gardens in Kew, in London, where it was identified. It was wild coffee. In fact, it was the last wild Rodriguan coffee plant in the world.

A few years later, Douglas Adams, author of The Hitchhiker's Guide to the Galaxy, happened to visit Rodrigues in search of a disappearing wild parrot (little islands are not kind to rare creatures), and he was taken to see the plant. Here is what he saw:

"The plant was standing by the side of the road, right by the traffic and in considerable danger because any plant in Rodrigues is considered fair game for firewood. So they put a fence round it to stop it from being cut down. Immediately they did this, however, people started thinking 'Aha, this is a special plant,' and they climbed over the fence and started to take off little branches and leaves and pieces of bark. Because the tree was obviously special, everybody wanted a piece of it and started to ascribe remarkable properties to it -- it would cure hangovers and gonorrhea. ...

I happened on Adams' description while reading his book, written with Mark Carwardine, Last Chance to See. Wondering how the story ended, I began making calls, found a botanist, Wendy Strahm (who agreed to meet me at the 30th Street Railroad Station in Philadelphia for an hour), Margaret Ramsay, a plant specialist from Kew (who agreed to spend an afternoon off at our London studio so that she could take her husband for a birthday dinner in the West End) and Richard Payendee, a conservation worker on Rodrigues (who dutifully took my far-too-many international phone calls) and pieced together the rest of the story, which, very briefly, involves:

-- an international rescue mission that rushed two fragile bits of plant to London.

-- a 20-plus-year attempt by some of the most sophisticated botanists in the world to get this plant to create a seed so it could have a future.

-- a daring experiment in 2003 that produced a breakthrough.

-- and, most important, and most dramatically, an unanticipated, unexplainable and utterly mysterious conclusion.

(Well, you should listen to the story. It will make you smile.)