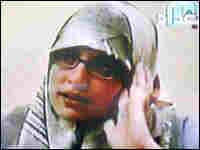 A TV-image of U.S. journalist Jill Carroll as she gives a brief television interview after her release on Thursday. Reuters hide caption 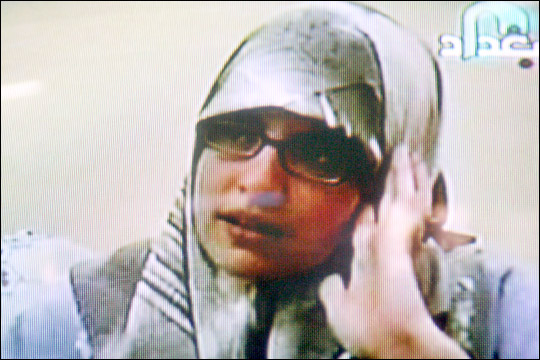 A TV-image of U.S. journalist Jill Carroll as she gives a brief television interview after her release on Thursday. 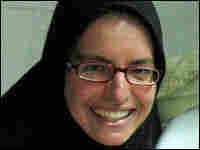 BAGHDAD, Iraq (AP) -- American reporter Jill Carroll was set free Thursday, nearly three months after she was kidnapped in a bloody ambush that killed her translator. She said she had been treated well.

In December 2005 Jill Carroll spoke with Farai Chideya on 'Day to Day' about parliamentary election results in Iraq. Little more than a week after the interview, Carroll was kidnapped.

Carroll, 28, was dropped off near the Iraqi Islamic Party offices. She walked inside, and people there called American officials, Iraqi police said.

"I was treated well, but I don't know why I was kidnapped," Carroll said in a brief interview on Baghdad television.

Carroll was kidnapped Jan. 7 in Baghdad's western Adil neighborhood while going to interview Sunni Arab politician Adnan al-Dulaimi. Her translator was killed in the attack about 300 yards from al-Dulaimi's office.

The previously unknown Revenge Brigades claimed responsibility. Even though the group threatened twice in videotapes to kill Carroll, she said, "They never hit me. They never even threatened to hit me."

The Italian news agency ANSA reported that Carroll underwent a medical checkup at the American hospital in the Green Zone.

During the TV interview, Carroll wore a light green Islamic headscarf and a gray Arabic robe.

"I'm just happy to be free. I want to be with my family," she was heard to say under the Arabic voiceover.

Carroll said she was kept in a furnished room with a window and a shower, but she did not know where she was.

"I felt I was not free. It was difficult because I didn't know what would happen to me," she said.

She said she was allowed to watch TV once and read a newspaper once.

Asked about the circumstances of her release, she said, "They just came to me and said we're going. They didn't tell me what was going on."

"She is healthy and we handed her over to the Americans," party member Nasir al-Ani told The Associated Press.

In Berlin, Secretary of State Condoleezza Rice said she was "pleased" by the news of Carroll's release.

"This is something that people have across the world worked for and prayed for and I think we are all very pleased and happy to hear of her release," Rice said.

Carroll's family said they were elated at news of her release. Her father, Jim, said at his house in Chapel Hill, N.C., that he was waiting to learn more about his daughter before making travel plans to reunite with her.

"Obviously, we are thrilled and relieved that she has been released," he said on the porch of his home. "We want to thank all that have supported and prayed for her. We want to especially thank The Christian Science Monitor, who did so much work to keep her image alive in Iraq."

During Carroll's months in captivity, she had appeared twice in videos broadcast on Arab television, pleading for her life.

Her captors had demanded the release of all women detainees in Iraq by Feb. 26 and said Carroll would be killed if that did not happen. The date came and went with no word about her fate.

On Feb. 28, Iraq's Interior Minister Bayan Jabr said Carroll was being held by the Islamic Army in Iraq, the insurgent group that freed two French journalists in 2004 after four months in captivity.

She was last seen in a videotape broadcast Feb. 9 by the private Kuwaiti television station Al-Rai. Her twin sister, Katie, issued a plea for her release on Al-Arabiya television late Wednesday.

"I don't know whether to cry or skip down my street," Jackie Spinner, a friend who is a reporter for The Washington Post, told ABC's Good Morning America.

Carroll went to the Middle East in 2002 after being laid off from a newspaper job. She had long dreamed of covering a war.

In American Journalism Review last year, Carroll wrote that she moved to Jordan in late 2002, six months before the war started, "to learn as much about the region as possible before the fighting began."

"There was bound to be plenty of parachute journalism once the war started, and I didn't want to be a part of that," she wrote.

Carroll has had work from Iraq published in the Monitor, AJR, U.S. News & World Report, ANSA and other publications. She has also been interviewed on National Public Radio.

ANSA's editor-in-chief, Pierluigi Magnaschi, wrote Carroll an e-mail, telling her: "Welcome back, Jill. We worried about you and rooted for you for a long time, with all our strength."

Magnaschi invited her to Rome saying, "You deserve this stupendous Rome that is blossoming into spring. We await you."

On Wednesday, Katie Carroll said her sister is a "wonderful person" who is an "innocent woman."

"I've been living a nightmare, worrying if she is hurt or ill," she in a statement read on the Al-Arabiya network.

Carroll is the fourth Western hostage to be freed in eight days. On March 23, U.S. and British soldiers, acting on intelligence gained from a detainee, freed Briton Norman Kember, 74, and Canadians James Loney, 41, and Harmeet Singh Sooden, 32, from a house west of Baghdad.

The three belonged to the Christian Peacemakers Teams group and had been kidnapped with an American colleague, Tom Fox, 54, on Nov. 26. Fox was killed and his body was dumped in western Baghdad on March 9.