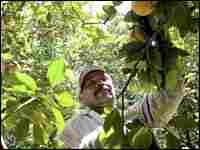 A migrant worker picks oranges at a grove in Bradenton, Fla. Many of the agricultural products in the area are planted, harvested and processed by immigrants, both legal and illegal. Photo by Phillippe Diederich/Getty Images hide caption

Nearly 12 million illegal immigrants are estimated to be living in the United States. The vast majority work in low-skill, low-wage jobs. More than half work in construction, manufacturing or leisure and hospitality.

• By increasing the labor supply between 1980 and 2000, immigration reduced the average annual earnings of U.S.-born men by an estimated $1,700, or roughly 4 percent.

• Among those born in the United States who did not graduate from high school — roughly the poorest one-tenth of the work force — the estimated impact was even larger, reducing wages by 7.4 percent.

• The negative effect on U.S.-born black and Hispanic workers is significantly larger than on whites, because a much larger share of minorities are in direct competition with immigrants.

• The reduction in earnings occurs regardless of whether the immigrants are legal or illegal, permanent or temporary. It is the presence of additional workers that reduces wages, not their legal status.

Advocates on both sides of the immigration debate predict dramatic change if illegal immigration is drastically curtailed. Supporters of a crackdown argue that the U.S. economy would benefit if illegal immigrants were to leave, because U.S. employers would be forced to raise wages to attract American workers. Critics of this approach say the loss of illegal immigrants would stall the U.S. economy, saying undocumented workers do many jobs few native-born Americans will do. NPR business correspondent Adam Davidson explores the issue.

Q: What is the impact of illegal immigration on wages in the United States?

Illegal immigrants seem to have very little impact on unemployment rates. Undocumented workers certainly do take jobs that would otherwise go to legal workers. But undocumented workers also create demand that leads to new jobs. They buy food and cars and cell phones, they get haircuts and go to restaurants. On average, there is close to no net impact on the unemployment rate.

More than a third of illegal immigrants live in just three cities: New York, Los Angeles and Chicago. But even in these places, economists believe there is minimal impact on wages. That's because many Americans from other parts of the country choose not to move to areas with large numbers of immigrants, because they want to avoid competing for jobs.

Even in industries with high concentrations of illegal workers -- such as construction, restaurants and some parts of agriculture -- the impact isn't as great as many people think. If there weren't illegal immigrants working in construction in places like Chicago and Miami, then demand for legal workers would go up, which would mean wages would rise. But very quickly, legal workers from other parts of the country would move to those cities, and wages would go back down. The net impact on wages would be relatively modest.

Illegal immigrants do often take some of the country's least attractive jobs, such as in meat packing and agriculture. If there were no undocumented workers available for those jobs, employers would likely invest in new technology, replacing workers with automation.

Q: How do illegal immigrants affect the overall U.S. economy?

Illegal immigration has both negative and positive impacts on different parts of the economy. As noted above, wages for low-skilled workers go down. But that means the rest of America benefits by paying lower prices for things like restaurant meals, agricultural produce and construction. Another negative impact is on government expenditures. Since undocumented workers generally don't pay income taxes but do use schools and other government services, they are seen as a drain on government spending.

There are places in the United States where illegal immigration has big effects (both positive and negative). But economists generally believe that when averaged over the whole economy, the effect is a small net positive. Harvard's George Borjas says the average American's wealth is increased by less than 1 percent because of illegal immigration.

The economic impact of illegal immigration is far smaller than other trends in the economy, such as the increasing use of automation in manufacturing or the growth in global trade. Those two factors have a much bigger impact on wages, prices and the health of the U.S. economy.