Accessibility links
Coming of Age in 'ATL' Over the last decade Atlanta has become a mecca for black Americans and it serves as the backdrop for a new movie, ATL. Director Chris Robinson tells Ed Gordon about the coming-of-age tale, and why he set his first feature film in the city known as "Hotlanta."

Listen
Coming of Age in 'ATL'

Over the last decade Atlanta has become a mecca for black Americans and it serves as the backdrop for a new movie, ATL. Director Chris Robinson tells Ed Gordon about the coming-of-age tale, and why he set his first feature film in the city known as "Hotlanta." 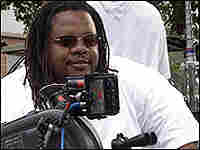 Chris Robinson is behind the camera for 'ATL.' Warner Bros. hide caption 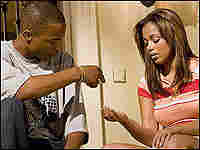 I'm Farai Chideya, and this is NEWS AND NOTES. You may not know his name, but if you've ever watched hip-hop videos, you've seen his work. Director Chris Robinson is the man behind the lens for some of hip-hop's lushest music videos, including ones for Ludacris, Jay-Z, and Beyonce. Now he's gone Hollywood, Robinson's first feature film, ATL, opens in theaters nation wide today. The film is about four friends growing up in Atlanta. They're high school seniors trying to escape their South Atlanta neighborhood.

Robinson spoke to NPR's Ed Gordon about the film.

Mr. CHRIS ROBINSON (Director, ATL): You know like these kids have complicated lives. You might be a young man, but you have grown man problems and grown man issues. The one place where they kind of are free is this place called Cascade and it's a roller rink. And I just kind of equate that to American Graffiti when they used to go to Mels': it's the place where they hang out. And in the middle of it is Rashad, played by T.I. Not only is he trying to figure out what he wants to do with his future, he's trying to protect his younger brother from going out there doing something that might be off of his path, and at the same time he may be falling in love. He is a very closed-in young man, but there's a girl that is making him open up.

GORDON: Black America knew, but America is starting to discover that really the Mecca for black American movement now is the city of Atlanta. Talk to me about what you wanted to show not only in the storyline that obviously the writer put together, but the idea of illustrating what Atlanta is today for black America.

Mr. ROBINSON: The more that I stayed in Atlanta, I just understood that it is the cradle of so many things, of the civil rights movement, Martin Luther King, of black people running a city, and how it makes you feel when you see people with businesses different from the rest of the United States. So it became a character into my film.

GORDON: And Chris, talk to me about--certainly something that I know that you've dealt with, not only through your career with music videos, but the imagery of black America, and that is a concern of particularly older generations in terms of what we're seeing push forward, that the landscape isn't as all encompassing as it should be. What do you tell people who are concerned about that?

But we also have to look at ourselves, and we need to show up at the Antoine Fisher story, because that's an amazing movie, and we didn't show up to see it. And Hollywood is a business. And I think that what we have to do artistically is not be afraid. Show what's diverse in our community, and when our community reacts to it because it's real and because it touches home, and because it shows the world us in a different way, then Hollywood goes, okay, that worked. Let's make another one.

GORDON: When you grew up as black kids off and unfortunately find the dreams are limited in the sense of we always look at certain avenues that we go down, and certainly when you were growing up, the idea of being a film director, a TV director one of that I would suspect was a distant dream, who helped kick you into believing that this could be real for you?

Mr. ROBINSON: Truthfully, it definitely was one of those things that because no one did it around my way, people were like, are you crazy? Like what is that? Why do you watch BET all day? Why are you watching Donnie Simpson? Because I had in my head what I wanted to do. And my mother kept telling me to go to the post office and get that application. But what really made me feel like there was something more that I could this was there was a guy around my way named Jerome Carter, and he was a high jumper, and he went all around the world. He went to Europe. And he is from my little town in Edgewood. I'm from Baltimore.

He kept telling me, it's more out there. And eventually, I got to see more. I got to go to California. I went to Belgium and shot a music video with him. And then once I discovered Spike Lee and read his book, then the dots really got connected and I was like, this is what I want to do.

GORDON: You seem to be a student of the game. You didn't just pick this up. You talk about going to the movie houses as a kid, and obviously, you've studied film, filmmaking, love movies. Most people like that have the one story they've been longing to tell. Do you have one of those?

Mr. ROBINSON: Yeah. I think my problem is I have about 10 of those. So I'm from Baltimore, and I have a story that encompasses Baltimore and a lot of things that happened that I know about through the history of Baltimore. And hopefully, that's something that I can bring to the screen once I pay my dues in this game

It's like in the music video game, I'm right there, but here I'm a freshman. So as I come into the game, more people start listening to you has you as you create a body of work.

GORDON: We hope that ATL will just be the beginning and hope it's a big opening for you. Chris Robinson, big fan, and listen, man, congratulations.

FARAI CHIDEYA: Chris Robinson is the director of the film ATL which opens today.