A Different Kind of Performance Enhancer

A Different Kind of Performance Enhancer 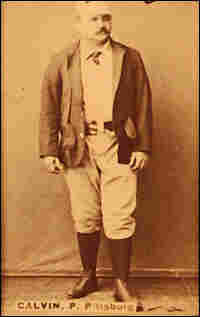 In 1889, a Pittsburgh pitcher named Jim "Pud" Galvin became the first baseball player to be widely known for using a performance enhancer. (He was nicknamed "Pud" because his pitching supposedly turned opposing batters into "pudding" -- much like Barry Bonds' brain.) Before pitching a game against Boston, Pud used something called the elixir of Brown-Sequard... essentially testosterone drained from the gonads of an animal. And, low and behold, the juiced-up Galvin won.

NPR's Luke Burbank has the scoop this morning, and the amazing thing is that no one seemed to mind the use of performance enhancers back then. The Washington Post all but pushed the drug in an article from 1889:

"If there still be doubting Thomases who concede no virtue of the elixir, they are respectfully referred to Galvin's record in yesterday's Boston-Pittsburgh game. It is the best proof yet furnished of the value of the discovery."

So far, no modern baseball player has admitted to popping testicles, but I dare you to ask Barry.