Accessibility links
Who Was This Guy George Mason? George Mason University has surprised sports fans by making it to the NCAA Final Four basketball tournament. But who was this George Mason character, anyway? Madeleine Brand talks to a descendent of the founding father about Mason's historical impact -- and his grouchy personality.

Listen
Who Was This Guy George Mason?

George Mason University has surprised sports fans by making it to the NCAA Final Four basketball tournament. But who was this George Mason character, anyway? Madeleine Brand talks to a descendent of the founding father about Mason's historical impact — and his grouchy personality. 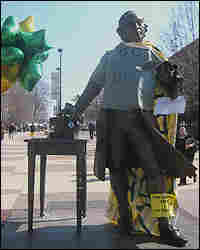 The George Mason statue on the campus in Fairfax, Va., is all dressed up for the Final Four. Jeremy Hobson, NPR hide caption

And I'm Alex Chadwick. And in this part of the program, we're going to have basketball, baseball, and a ton, an actual ton of cocaine. First, basketball.

BRAND: Did I get all the right numbers of greats in there?

Ms. PAYNE: If you said six greats, then you got it right.

BRAND: Okay. So I assume you know who George Mason was.

Ms. PAYNE: Yes, I do. He was a, actually we like to call him the Forgotten Founding Father. He is, was present at all of the major meetings of the Founding Fathers and wrote the Virginia Declaration of Rights, the precursor to the Declaration of Rights of the United States, because Mason talked about ensuring the enjoyment of life and liberty, and the right of pursuing and obtaining happiness and safety. That obviously became Jefferson's pursuit of life, liberty and the pursuit of happiness.

BRAND: And did he credit his friend George Mason with that?

Ms. PAYNE: He did, sort of indirectly. Jefferson said that Mason was quote "the wisest man of his generation." Although they did have their differences later on because Mason refused to sign the Constitution.

BRAND: And why was that?

Ms. PAYNE: He had refused to sign a Constitution because it did not have a bill of rights, which he thought was essential.

BRAND: And later, of course, it did have a bill of rights. Was he vindicated?

BRAND: Well, why wasn't he as famous as his friends, Jefferson, Madison, Washington?

Ms. PAYNE: He really disliked public life and preferred nothing more than the comforts and security of home.

BRAND: And I understand he had a bit of a prickly personality as well.

Ms. PAYNE: He was a bit of a curmudgeon. He suffered from a pretty severe case of gout, which, if you've ever heard of it, makes you very cranky. He wanted to stay home, take care of his plantation, raise his children and devote himself to private matters.

BRAND: Well, speaking of plantations, he was anti-slavery, even though he owned slaves.

Ms. PAYNE: Yes, he was. That's a conflict that we find, actually, with prominent people throughout American history. He did believe that it was an evil construct, and thought that it should be addressed in the Constitution.

BRAND: Was he a sporty guy? Was he athletic?

Ms. PAYNE: Not that I'm aware of, although I can speculate that in 17th century plantation life he probably rode horses a lot, and probably walked a lot.

BRAND: How do you feel about George Mason University being in the spotlight these days?

Ms. PAYNE: Oh, I think it's delightful. I love it when underdogs upset the system. And I think Mason, George Mason probably would have appreciated that aspect of it as well.

BRAND: And so are you going to any of the basketball games?

Ms. PAYNE: I'm afraid I'm not. I confess I'm not much of a sports fan.

BRAND: Okay. Well, I want to thank you very much.

Ms. PAYNE: Thank you. It was my pleasure.