Accessibility links
Alaskan Town Fears Second Deadly Bird Flu Visit It's only a matter of time before the H5N1 bird flu virus reaches the United States, say health officials. Alaska's northwest coast is considered a primary point of entry, and the town of Brevig Mission, which relies on wild birds for subsistence, is worried. 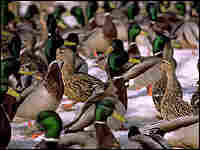 The villagers of Brevig Mission worry their reliance on wild birds for subsistence may put them at risk for bird flu. Kennan Ward/Corbis hide caption

Alaska's northwest coast, a major flyway for migrating birds, is considered a primary point of entry. The region has already played a major role in the effort to halt the disease.

The flu virus that killed tens of millions worldwide after it appeared in 1918 has been recreated in the virological equivalent of the Jurassic Park story.

Scientists rebuilt it from pieces of genetic material retrieved from the lungs of people who died 87 years ago, including an Inuit woman. Researchers say the tightly guarded replica is even more virulent than they expected.

In 1918, a pandemic, sparked by bird flu virus, swept through the tiny Alaskan coastal community of Brevig Mission. Tissue samples taken more than half a century ago from a mass grave there provided a map of that virus, which is helping researchers figure out how the current H5N1 virus works.

Brevig Mission's mass grave holds the remains of the 72 victims, and has been opened twice. In 1951, pathologist Johann Hultin convinced village elders to allow him to take tissue samples from bodies buried in permafrost. His lab attempts to map the virus were unsuccessful, but he returned in 1997 and was once again given permission to re-open the grave.

While other Arctic communities turned people away with armed guards, Brevig Mission took in the sick and orphaned during the pandemic. So many people died so quickly, village council member Rita Olanna says her grandfather told her even the sky seemed sad.

Today a real fear for this coastal community is the knowledge that wild birds can carry the H5N1 virus and that people can catch it just by handling the infected birds.

As winter moves on and the start of spring duck hunting gets closer, villagers are worried. Wild birds have been harvested for generations as a staple subsistence food. For remote communities like Brevig Mission, there is little choice.

Origins of the 1918 Pandemic: The Case for France 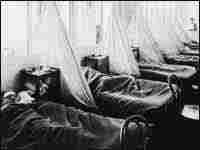 Did the American Army bring a flu epidemic to France, or were British soldiers stationed in France responsible? Seen here, patients lie in Influenza Ward No. 1 in U.S. Army Camp Hospital No. 45 in Aix-les-Baines, France, during World War I. Queen Mary's School of Medicine hide caption 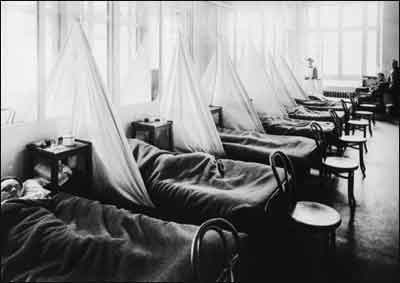 Did the American Army bring a flu epidemic to France, or were British soldiers stationed in France responsible? Seen here, patients lie in Influenza Ward No. 1 in U.S. Army Camp Hospital No. 45 in Aix-les-Baines, France, during World War I.

It's not often that you find countries fighting to claim credit for the birth of an epidemic. Take syphilis, a disease which has infected millions -- man, woman and child alike. If you were in Italy when the disease first hit Europe in the 15th and 16th centuries, you called it the "French pox." If you were in France, you called it the "disease of Naples." Or, you could blame it on the Native Americans. Voltaire did. He said Columbus' crew brought it back from the New World.

But when it comes to the deadliest pandemic in history, scientists from two superpowers are calling dibs rather than pointing fingers.

Everyone seems to agree that the 1918 flu epidemic, known as the "Spanish flu," didn't start in Spain. (That name probably came from the fact that only Spain was publishing news about local flu epidemics; there was a blackout on news that might lower morale in Germany, Britain and France.) American experts, such as Jeffrey Taubenberger of the Armed Forces Institute of Pathology and historian John M. Barry, back the theory that the virus, which eventually killed 50 million people, got its start in America's heartland.

The made-in-America version goes like this: Loring Miner, a Haskell County, Kansas, doctor raised the first warning, reporting an "influenza of a severe type" circulating in the area. Haskell County boys may have then carried the virus to a Kansas army camp. From there, the virus caught a ride with tens of thousands of young soldiers on their way to Europe.

John Oxford, a professor of virology at Queen Mary's School of Medicine in London, holds to a different theory: the British Empire nurtured the disease.

The British army had an enormous training camp set up in Etaples, France. On any given day, 100,000 soldiers were milling around. Many were on their way to World War I's Western Front; others, wounded, sick, and often prisoners, were on their way back. The camp had 24 hospitals alone and a team of fearful -- but curious -- pathologists. They recorded post mortems on everything that came their way. "They were worried, even at that stage, in 1916, about the possibility of infectious disease decimating the British army, as had happened in the past with typhus and cholera," says Oxford.

Then, just after the Battle of the Somme in the winter of 1916-1917, dozens of soldiers at the camp fell ill, complaining of aches, pains, cough and shortness of breath. Mortality was high at 40 percent, and some also had what later became known as a telltale sign of the killer flu: Their faces were tinged a peculiar lavender color, a condition known as heliotrope cyanosis.

Two months later, says Oxford, a similar outbreak was reported near London at Aldershot, site of one the biggest barracks in the army. Aldershot pathologists eventually published studies in The Lancet medical journal pinpointing the origin of the 1918 pandemic to Etaples and Aldershot.

Several creepy similarities between the 1918 flu and the H5N1 bird flu virus currently spreading around the globe make such historical detective work relevant, says Oxford. The 1918 virus got its start in birds. And the soldiers in the army camps -- whether in Etaples or Kansas -- lived much like people in Asia and Africa do today: in close quarters, surrounded by lots of birds. There were "zillions" of birds at Etaples, says Oxford: "ducks, geese, chickens, you name it. We have photos of the soldiers plucking them."

What's particularly foreboding for Oxford is that maybe fewer than 100 soldiers died in the initial breakouts at Etaples and Aldershot barracks. "If you were to go back now and talk to people at [Etaples] in 1917 and say 'There are 50 soldiers dead here. Do you think there's any chance 50 million will be dead next year?' They would think you were totally mad," says Oxford. History's message, he says, is that pandemics start out small. He believes the H5N1 virus, which has killed around 90 people so far, could very well turn into a pandemic.

John M. Barry, author of The Great Influenza: The Epic Story of the Deadliest Plague in History, is familiar with Oxford's theory, but he sticks by the rural-Kansas hypothesis. Barry says there is more consistent evidence for Kansas. Both agree that only genetic analysis of tissue samples -- hard to come by -- from these early outbreaks will solve the mystery.

"Ultimately, I don't think it matters where it began," says Barry. "The most important thing is that it can begin anywhere." And for public health officials, says Barry, that means building a worldwide surveillance system that has an eye on a Kansas, or France, as well as Asia.