Accessibility links
Sen. Feingold Finds Little Support in Censure Motion The Senate Judiciary Committee holds a hearing on the motion by Sen. Russ Feingold (D-WI) to censure President Bush. But, besides Feingold, only one other Democrat shows up at the hearing, illustrating the problems Feingold has in getting his party's support.

The Senate Judiciary Committee holds a hearing on the motion by Sen. Russ Feingold (D-WI) to censure President Bush. But, besides Feingold, only one other Democrat shows up at the hearing, illustrating the problems Feingold has in getting his party's support. 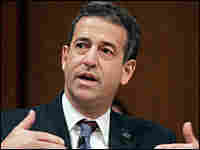 U.S. Senator Russ Feingold (D-WI) speaks March 31, 2006, in support of his resolution to censure President Bush for the administration's electronic-surveillance program while at the Senate Judiciary Committee on Capitol Hill. Reuters/Reuters hide caption 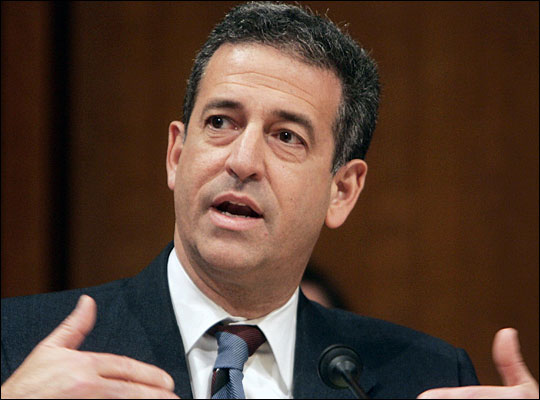 U.S. Senator Russ Feingold (D-WI) speaks March 31, 2006, in support of his resolution to censure President Bush for the administration's electronic-surveillance program while at the Senate Judiciary Committee on Capitol Hill.

A resolution by Congress to censure the president carries no legal weight, but such a measure, last used a century and a half ago, could be politically powerful. And that's why senators who back President Bush rallied to his defense at a Judiciary Committee hearing today. It focused on Wisconsin Democrat Russ Feingold's resolution to censure the president for having the National Security Agency perform warrantless domestic wiretaps. NPR's David Welna reports from the Capitol.

DAVID WELNA: Unlike other Republicans who chair powerful congressional committees, Judiciary Chair Arlen Specter's insisted on holding hearings on the NSA's warrantless surveillance, which he thinks should be under court supervision. Today's hearing was the fourth one he's held on the issue, though Specter did make clear from the outset he did not endorse what was being considered.

ARLEN SPECTER: Some would say that the resolution by Senator Feingold to censure the president is frivolous. I'm not prepared to say that. But I do think that there is no merit in it.

WELNA: But the panel's top Democrat, Patrick Leahy, said he's inclined to think censure of the president is an appropriate sanction for the Bush Administration's backing of spying he called Alice in Wonderland gone amok.

PATRICK J: And we know that the legal justifications he has offered for doing so, which have admittedly evolved over time, are patently flimsy. I therefore have no hesitation in condemning the president for secretly and systematically violating the laws of the United States of America.

WELNA: That brought a grateful response from Wisconsin Democrat Feingold, who had this admonition for fellow senators.

RUSSELL D: If we in the Congress don't stand up for ourselves and for the American people, we become complicit in the lawbreaking. A resolution of censure is the appropriate response, even a modest approach.

FEINGOLD: Mr. Chairman, the presence of John Dean here today should remind us that we must respond to this constitutional crisis based on principle, not partisanship.

WELNA: But Texas Republican John Cornyn had a less than friendly welcome for Dean.

JOHN CORNYN: You know, when I was looking this morning at one of the witnesses that's going to be testifying, that's selling a book, and that is a convicted felon...

WELNA: Dean, who served jail time for his part in the Watergate scandal, told the panel it's sometimes important to hear from what he called the dark side. He said a censure of President Bush is entirely appropriate.

WELNA: But South Carolina Republican Lindsey Graham went after Dean for comparing the current president to his former boss, brought down by the Watergate break in.

LINDSEY GRAHAM: Did he ever know about it?

DEAN: After it happened.

GRAHAM: Okay, so then he covered up a crime that he knew to be a crime, right?

DEAN: Senator, it might be important for you to know that...

GRAHAM: Did he cover up a crime that he knew to be a crime?

DEAN: He covered it up for national security reasons.

GRAHAM: Give me a break.

WELNA: Graham later apologized for being rude. He also stated his opposition to Americans being spied on without outside review. Fellow Republican Cornyn, meanwhile, pointed out the scant support Feingold's received from fellow Democrats.

CORNYN: It is, I think, somewhat indicative of the meritlessness of the motion that Senator Feingold's motion has been cosponsored by only two members of his political party, and everyone else seems to have run for cover.