Accessibility links
Veterans of 'Pingpong Diplomacy' Revisit China Nine U.S. table tennis players made history in 1971, becoming the first Americans to visit China in more than two decades. It was a step toward U.S.-Chinese diplomatic ties. Five members of the original team recently went back for exhibition matches.

Nine U.S. table tennis players made history in 1971, becoming the first Americans to visit China in more than two decades. It was a step toward U.S.-Chinese diplomatic ties. Five members of the original team recently went back for exhibition matches. 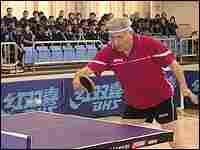 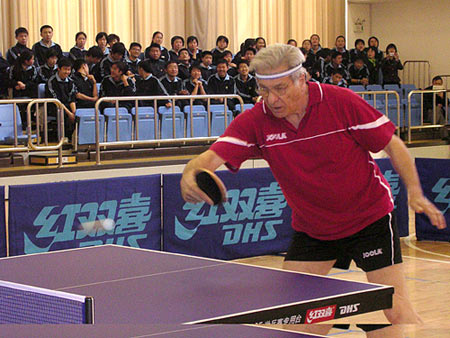 Jack Howard, the captain of the 1971 U.S. ping pong team, plays an exhibition match in Shanghai.

Thirty-five years ago, President Nixon called it the week that changed the world. Seven young table tennis players made history in 1971 when they became the first Americans to visit China in more than two decades. Their ping-pong diplomacy opened the way for China and the United States to re-establish diplomatic relations. This week, five of those players returned to Shanghai, where they met with NPR's Louisa Lim.

LOUISA LIM: The brass band played, clapping scooters would line the route. The middle-aged guests of honor with their white hair and spectacles hardly looked like elite athletes, but these men and women have a unique place in sports and political history. They were the ping-pong diplomats. They'd been competing in Japan in 1971 when they were suddenly invited to China, which was still engulfed in the Cultural Revolution. John Panahill(ph) remembers the atmosphere as slightly chilling with Chairman Mao seemingly ever present.

LIM: Thirty-five years later, as the welcoming speeches begin, he describes his feelings on returning to China.

PANAHILL: It's a brand-new country. It's rich and powerful, with skyscrapers all over the place. I'm a little shocked. The level of change is tremendous.

LIM: Their first visit made headlines around the world, a rapt American public watching their every move. Team captain Jack Howard says they had no idea what big news they'd become.

JACK HOWARD: You know, we didn't understand how important it was. We found out when we came back to the United States. You know, we got off the plane and there was several hundred people taking pictures and on TV and people like you were asking questions. I said, What's going on?

LIM: He plays an exhibition match with a Chinese opponent, not one of the original 1971 team, and he loses only (unintelligible). Back then, it was an open secret the Chinese were letting the Americans win some of the matches out of friendship. But as Jack Howard points out, it was never really about ping-pong.

HOWARD: The main thing was, it really did help improve relations between China and the United States, that was the important thing and the lasting thing. And I'm very happy to have been a part of that.

LIM: To Chinese people the news that American imperialists were being received as honored guests was electrifying. In 1971, Jo Don Rin(ph) was a professor who was being re-educated in the countryside, as many intellectuals were during the Cultural Revolution.

JO DON RIN: It was the big news to almost all the Chinese. Unfortunately, the actual game playing part of that was not shown, as far as I can remember. Who win or who lose, people were not quite clear. But all we know at the time was that we had a team of Americans visiting China and they were all smiling and they were received by the top leaders, and that was news enough and that was shocking enough.

LIM: But you didn't get to watch the games, because in the States, the Americans watched all the games.

DON RIN: Well, we didn't, and we, I'm sorry to say, we need not to watch the games. We knew definitely China's players will win.

LIM: Well, I suppose the Chinese were number one in the world.