Accessibility links
'Inside Man' vs. 'Quick Change' In many ways, Spike Lee's film Inside Man is reminiscent of an earlier heist flick called Quick Change. Scott Simon discusses both movies with Elvis Mitchell, host of The Treatment on NPR station KCRW in Santa Monica, Calif.

Listen
'Inside Man' vs. 'Quick Change'

In many ways, Spike Lee's film Inside Man is reminiscent of an earlier heist flick called Quick Change. Scott Simon discusses both movies with Elvis Mitchell, host of The Treatment on NPR station KCRW in Santa Monica, Calif. 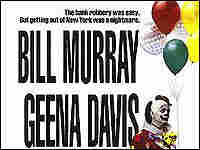 Bill Murray is "a crying on the inside" kind of clown in the 1990 film 'Quick Change.' Warner Bros. hide caption

Before there was the Inside Man, there was a movie called Quick Change, a comedy about a bank heist that seems to go right, but then suddenly wrong. It stars Bill Murray as a bank-robbing clown who can't seem to get any respect.

BILL MURRAY: Unidentified Man (Actor): What the hell kind of clown are you?

RANDY QUAID: It is.

SIMON: Elvis, thanks so much for being with us.

ELVIS MITCHELL: Thank you, Scott. And by the way, this is a gun, not a gub.

SIMON: Listen, are the producers of Inside Man getting away with a fast one here? I mean, is this a remake, a homage, or just simple theft?

MITCHELL: It's got a great cast, a very young Stanley Tucci, Tony Shalhoub, in addition to the future Oscar winner, Geena Davis, who hadn't won the Oscar yet at that point. And it's a first time directing job by Bill Murray. And Howard Franklin adapted the script from a Jay Cronley novel, which uses this texture. And in a way feels kind of like a parody of those 70s movies, movies like Dog Day Afternoon, that is also part of the texture of Inside Man.

SIMON: Mmm. What leads the movie industry to decide that this formula has appeal once again?

MITCHELL: Because that hasn't been seen for a while. What we see generally in heist movies now are these pictures where the guys robbing the bank, whatever institutions seem to be spending more money than they will actually make, putting all the equipment and their teams together...

MITCHELL: Oceans, yeah, absolutely. Or the Italian Job, where they all seem to be so smart, you think if they just saved their money, they wouldn't have to rob the banks. And what I think movies like Quick Change and Inside Man, do also is take us back to the pleasures of film acting.

MITCHELL: You get a chance to see actors do what they can do. And that's really missing from these movies, too. They're not just playing these sort of cool, suave archetypes who are a step ahead of everybody else. There is, in fact, some sort of sense of turmoil, some sense of kind of, I think, real social interaction in these movies. And I think both Quick Change and Inside Man had that feeling you get from watching New York actors who spent a lot of the time on stage doing lots of different things, getting a chance to sort of bite into the meat of the role and savoring the role for the time they're on camera.

SIMON: Mm-hmm. Interested in the fact that because of, let's say, the anticipated success, at least for the next couple of weekends of Inside Man, it gives a chance for a movie like Quick Change to get a whole new raft of attention in DVD. I wonder if this isn't something new in the home entertainment industry now.

MITCHELL: And for whatever reason, I don't know why, when Quick Change was finally released on DVD, it got almost no fanfare from the releasing company, no attention. And it's coming out from people who know the movie and love it, and understand how fun and how smart it really is, who are talking about it, who are building this buzz again.

SIMON: Elvis, thanks very much.

MITCHELL: And again, this is a gun, not a gub.

SIMON: Elvis Mitchell is our entertainment critic here on WEEKEND EDITION and host of KCRW's The Treatment, speaking with from KCRW in Santa Monica, California.