Listen
Voice from the Past: Booker T. Washington

We hear a recording of Booker T. Washington's most famous words. April 5 marks the 150th anniversary of his birth. 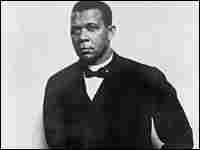 Educator Booker T. Washington, head of the Tuskegee Institute, was born this week in 1856. One of his most famous speeches was the Atlanta Exposition Address, which he gave on September 18th, 1895. Our ace research librarians found this recording of Washington reciting an excerpt from the speech, although it may have been a re-creation, we aren't sure. But we thought it was timely, because it features Washington's classic refrain, Cast-down-your-buckets-where-youare, through which Washington urged blacks not to leave the south in search of opportunities elsewhere, but rather to stay put and, in his words, cultivate friendly relations with the Southern white man, who is their next-door neighbor. Please listen carefully. This tape is over 100 years old. Booker T. Washington urging southern blacks to cast-down-your-buckets-where-you-are.

Mr. BOOKER T. WASHINGTON (educator and former head of the Tuskegee Institute): To those of my race who depend on bettering their condition in a foreign land or who underestimate the importance of cultivating friendly relations with the Southern white man, who is their next-door neighbor, I would say, Cast-down-your-bucket-where-you-are, cast it down in making friends in every manly way of the people of all races by whom you are surrounded.

MARTIN: Washington believed that through hard work, African-Americans could gradually gain full access to the American dream. Needless to say, this point of view has been debated ever since. Booker T. Washington, born 150 years ago this Wednesday. This is TALK OF THE NATION from NPR News. I'm Michel Martin, in Washington.