Accessibility links
New Orleans Mayor: No More FEMA Trailers in City New Orleans Mayor Ray Nagin says he will no longer allow FEMA to put trailers in his city as temporary housing for residents displaced by hurricanes. He says he made the decision after some people from the federal agency mistreated residents of the Algiers neighborhood.

New Orleans Mayor Ray Nagin says he will no longer allow FEMA to put trailers in his city as temporary housing for residents displaced by hurricanes. He says he made the decision after some people from the federal agency mistreated residents of the Algiers neighborhood. 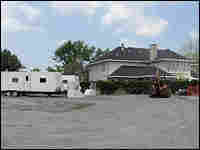 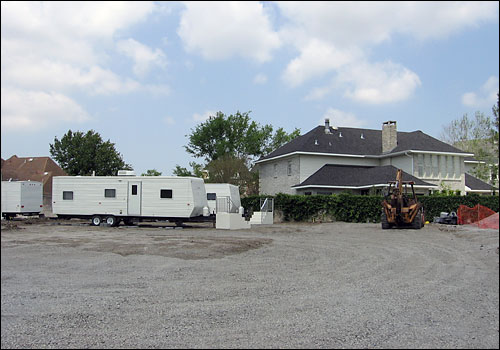 The mayor of New Orleans wants FEMA to stop construction on all trailer parks being built for people displaced by Hurricane Katrina. Over the weekend, there was an altercation between neighborhood activists and FEMA contractors, and today, Mayor Ray Nagin said he wants the contractors gone.

As NPR's Jeff Brady reports, the dispute took place at a controversial construction site. The local Neighborhood Association says the trailer park, intended for single-parent families, is too close to their homes.

Activists in an affluent neighborhood of Algiers worry the FEMA trailer park will bring more crime to their neighborhood. Mayor Ray Nagin says construction was supposed to have stopped months ago. Nagin, who's running for reelection, says the contractors had the activists removed by armed security guards.

Mayor RAY NAGIN (Democrat, City of New Orleans): I'm just putting my foot down and say I've had enough, and I am not going to allow anybody coming from another place, the federal government I don't care. You're not going to come in and disrespect our citizens. You're just not going to do it. And if I have to shut this down and figure out a way to go borrow money to get this work done for temporary housing, we're going to do that. But we're not going to be disrespected.

BRADY: Finding locations for FEMA's temporary trailer parks in New Orleans has been a controversial issue for months. The dispute has actually kept some people from getting trailers and moving back into the city. A few months back the Mayor and the City Council fought over who had the authority to give final approval to the parks. Today, the two sides stood together against FEMA at their news conference. So the agency is disregarding local rules and putting parks wherever it wants to. FEMA representatives were not available to comment on the Mayor's decision to halt all trailer park construction. But in the past the agency has said red tape in New Orleans has slowed down the process of locating trailers.

Ms. JACKIE CLARKSON (New Orleans City Council Member): That is not true. They are using that as an excuse.

BRADY: City Council Member Jackie Clarkson says FEMA has been the problem. She says the agency has refused to work with the city to identify sites acceptable to those who've already moved back into their homes.

Ms. CLARKSON: We had one of the smoothest processes you have ever seen for the alternative, the alternate sites that we gave them. And they have not chosen to take that route.

BRADY: But in the past, FEMA has said New Orleans has been an unusual experience. Typically, local governments give up most of their control over zoning and permitting to get as many trailers in as quickly as possible. But here, local officials want veto power over every single trailer site. Some of the activists who had the altercation with FEMA contractors attended the press conference today. After it was over, one pulled out his checkbook and wrote out a contribution to Councilmember Jackie Clarkson's campaign. He said she's done a good job fighting FEMA's effort to change the character of their neighborhood by locating trailer parks close to their homes. Jeff Brady, NPR News, New Orleans.