Accessibility links
New Bifocals Activated with Flip of a Switch Bifocal glasses haven't changed much since the days of Benjamin Franklin. The wearer must change their sight angle to switch from one lens to another. But now a researcher has developed a way for liquid crystal material to instantly switch from seeing near to far across the eyeglasses' entire field of view.

Listen
New Bifocals Activated with Flip of a Switch 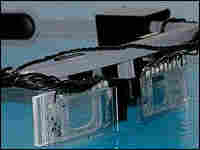 Prototype of the switch-activated biofocals. University of Arizona hide caption

Benjamin Franklin is generally credited with the invention of bifocals, and the basic technology hasn't much changed for 300 years. Traditional bifocal eyeglasses all basically have a lens that's split into two focusing powers: You look through the bottom for reading, and the top for distance. Now, researchers have come up with a completely different approach. They have developed an experimental bifocal that uses a pulse of electricity to switch the entire eyepiece from seeing far to seeing close.

The new bifocals were built by a group led by Nasser Peyghambarian at the University of Arizona in Tucson. "I wear bifocals and I've been wearing it for the last five years," he says. He says it can be annoying to look through what is essentially two different lenses in the same frame. People have to constantly move their eyeballs up and down. For some people, it can make images seem to jump around. And even though newer, "no-line" or progressive bifocals can help with this problem, some people still find that images are blurry at the edges or seem to "swim."

So the bifocal Peyghambarian has developed isn't made by grinding glass into a split lens. Instead, each eyepiece contains two flat panes of glass that are sandwiched together. "And between those pieces of glass, there is a thin layer of liquid crystal," he explains.

This liquid crystal is the key to making the eyepiece behave in two different ways. The liquid crystal is transparent, and its molecules normally point in one direction. But they all shift if they're hit with a tiny pulse of electricity, and that changes how light passes through them. So if someone is wearing these glasses and wants to read a book, all they have to do is flip a switch. "If you put the voltage on it, it acts like a lens," Peyghambarian says. "If you take it off, it just doesn't have any power, it becomes a piece of glass."

The switchable lenses are described in the current issue of the Proceedings of the National Academy of Sciences. The prototypes are bulky, almost like goggles. But Peyghambarian says people like looking through them. "They are great," he says. When people wear them and he switches the voltage on, the immediate reaction is, "Wow! I can read now."

His group is now working to slim the glasses down. And they want to replace the switch with the same kind of gadget that automatic cameras use to measure distance. The auto-focus would constantly monitor what you're looking at and instantly adjust the glasses.

Jeffrey Weaver is director of the clinical care group at the American Optometric Association. He says he'd love to see auto-focusing eyewear become a reality. "That's just returning us to the way that we're able to see as a teenager," Weaver says. "That's certainly the most natural way of focusing. Technology is finally coming around now to a point where we might actually be able to make it available to the general public."

A company is working on developing this technology into a consumer product. But it will still be awhile before aging eyes can have what teenagers take for granted.