Accessibility links
DeLay's Resignation: A Timeline of Events Ethics issues have swirled around Rep. Tom DeLay, R-Texas, since he was elected House majority leader in 2002.

DeLay's Resignation: A Timeline of Events

DeLay's Resignation: A Timeline of Events 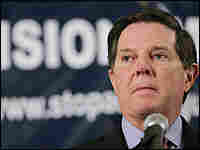 Associated Press -- Ethics issues have swirled around Rep. Tom DeLay, R-Texas, since he was elected House majority leader in 2002. A timeline of events:

1984: Elected to represent the 22nd District of Texas in the House of Representatives.

July 1997: DeLay is part of a group that tries, but fails, to oust House Speaker Newt Gingrich, R-Ga.

October 1998: DeLay attacks the Electronics Industries Alliance for hiring former Democratic Rep. Dave McCurdy as its president and later receives a private rebuke from the House ethics committee for "badgering a lobbying organization."

September 2004: Grand jurors in Texas indict three DeLay associates -- Jim Ellis, John Colyandro and Warren RoBold -- in an investigation of alleged illegal corporate contributions to a political action committee DeLay founded. The investigation involved the alleged use of corporate funds to aid Republican candidates for the Texas Legislature in the 2002 elections.

September-October 2004: DeLay is admonished by the House ethics committee on three issues. The panel chastises him for offering to support the House candidacy of Michigan Republican Rep. Nick Smith's son in return for the lawmaker's vote for a Medicare prescription drug benefit. It also says DeLay created the appearance of linking political donations to a legislative favor, and that he had improperly sought the Federal Aviation Administration's intervention in a Texas political dispute.

January 2005: House Republicans reverse a rule passed in November 2004 that would have allowed DeLay to keep his leadership post if he were indicted.

March 2005: Media reports spur Democrats to question DeLay's relationship with lobbyist Jack Abramoff, who is under federal investigation. Delay has asked the House ethics committee to review allegations that Abramoff or his clients paid some of DeLay's overseas travel expenses. DeLay has denied knowing that the expenses were paid by Abramoff.

April 2005: House Republicans scrap controversial new ethics committee rules passed earlier in the year that would have made it harder to proceed with an ethics investigation. Democrats said the rules were meant to protect DeLay.

September 2005: DeLay is indicted on charges of conspiring to violate Texas political fundraising law and forced to step aside as majority leader. Ellis and Colyandro are indicted on additional felony charges of violating Texas election law and criminal conspiracy to violate election law for their role in 2002 legislative races.

October 2005: DeLay, Ellis and Colyandro are indicted by a second grand jury on charges of conspiring to launder money and money laundering. DeLay turns himself in to the Harris County Sheriff's Office in Houston, where he is fingerprinted and photographed. He smiles broadly in his mug shot to thwart its use by political opponents. DeLay's attorneys win removal of a Democratic judge from the case because he has donated to Democratic causes and candidates. The Associated Press reports that DeLay and Rep. Roy Blunt, R-Mo., who succeeded DeLay as majority leader, orchestrated a political money carousel in 2000 that diverted donations secretly collected for presidential convention parties to some of their own causes.

November 2005: Former DeLay aide Michael Scanlon pleads guilty conspiring to bribe public officials, a charge that stems from the government investigation of work he and his former partner, lobbyist Jack Abramoff, did for Indian tribes. The investigation continues.

December 2005: A judge dismisses the conspiracy charge but refuses to throw out the more serious allegations of money laundering, dashing the congressman's immediate hopes of reclaiming his House majority leader post and increasing the likelihood of a criminal trial next year.

January 2006: Abramoff pleads guilty to federal charges of conspiracy, tax evasion and mail fraud and agrees to cooperate in an influence-peddling investigation that threatens powerful members of Congress. DeLay abandons his bid to resume his post as House majority leader.

March 29, 2006: Abramoff and former business partner Adam Kidan are sentenced in Miami to nearly six years in prison but are allowed to remain free while they help a congressional corruption investigation in Washington.

March 31, 2006: Tony Rudy, a one-time aide to DeLay, pleads guilty in Washington to conspiracy and promises to cooperate with a federal investigation of bribery and lobbying fraud.

April 4, 2006: DeLay announces that he is resigning his seat and won't seek re-election to Congress in the fall.