Accessibility links
After Quake, Arts Helped San Francisco Rebound At the turn of the century, some called San Francisco the Paris of the West. The 1906 earthquake leveled most of the city's theaters and artists' haunts. But the arts community rebounded to lead the city's recovery. 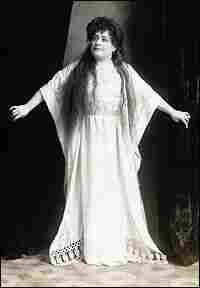 In 1910, opera star Louisa Tetrazzini gave a free concert to thousands of people in a rebuilt downtown, an event that symbolized San Francisco's revival. She is seen here as Lucia in Donizetti's Lucia di Lammermoor, in a circa 1905 photo. Bettmann/Corbis hide caption 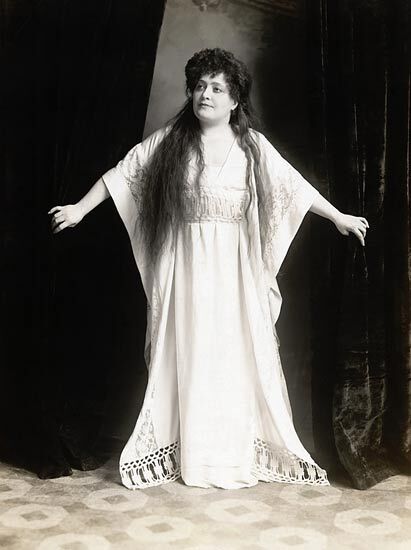 In 1910, opera star Louisa Tetrazzini gave a free concert to thousands of people in a rebuilt downtown, an event that symbolized San Francisco's revival. She is seen here as Lucia in Donizetti's Lucia di Lammermoor, in a circa 1905 photo. 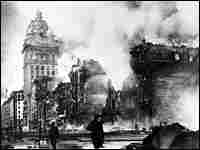 All but one of San Francisco's theaters were destroyed in the 1906 earthquake and ensuing fires. This photo shows Market Street burning after the quake. California Historical Society hide caption 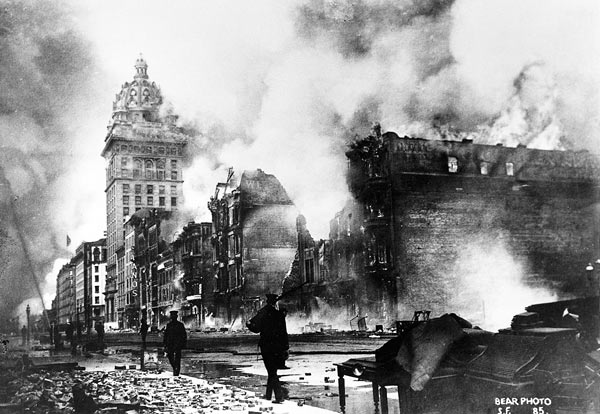 All but one of San Francisco's theaters were destroyed in the 1906 earthquake and ensuing fires. This photo shows Market Street burning after the quake.

Performances of the Day

Hear music and drama recordings from the period.

'The Toymaker's Shop' from 'Babes in Toyland' - Victor Herbert Orchestra 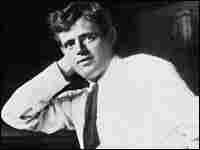 Jack London was among the writers and artists who dominated San Francisco's cultural scene at the time of the earthquake. Bettmann/Corbis hide caption

The Performing Arts and the 1906 Great Earthquake & Fire

One hundred years ago this month, San Francisco was forever changed. At the time it was the eighth-largest American city, and the economic and cultural hub of the West Coast. But on April 18, 1906, an earthquake and then fires struck, killing 3,000 people. In the aftermath, much of the city was leveled. But through it all, San Francisco's arts community kept singing, writing, acting, and raising money to help bring the city back to life.

The San Francisco of 1906 was diverse; there were Russians, Italians, Mexicans, Germans, Chinese. Almost every ethnic group could hear performances in their own language. Especially popular was the 1,500-seat Royal Chinese Theater, one of the city's oldest, where audiences heard Chinese opera that's still being performed today in San Francisco.

On April 17, on the eve of the earthquake, San Franciscans were out on the town. The big news was Enrico Caruso performing in Bizet's Carmen at the Opera House. But a production of Babes in Toyland, a popular operetta at the time, also drew crowds to the Columbia Theater downtown. 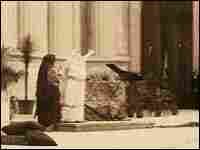 Sarah Bernhardt gives an earthquake-relief benefit performance of Phédre at the Hearst Greek Theater in Berkeley, May 17, 1906. Library of Congress hide caption

Sarah Bernhardt gives an earthquake-relief benefit performance of Phédre at the Hearst Greek Theater in Berkeley, May 17, 1906.

Library of Congress
Read more about the performance.

San Francisco's dance halls and theaters all grew out of the Gold Rush days, when the city went from a town of a few hundred people to a metropolis of tens of thousands almost overnight. Miners visited the city looking for entertainment. As some made money and settled in the city, they wanted to support the arts, Rosenstein says.

"They started really believing in building a city that had quality restaurants, quality theaters," he says. "People were amazed... when they started coming out here in the 1850s, how what had been this very rough frontier town" had turned into what some called the "Paris of the West."

The city drew illustrious performers such as Caruso, the Italian tenor, and the doyenne Sarah Bernhardt. Like Paris, the San Francisco of 1906 also had its painters and writers.

In the North Beach neighborhood, a restaurant named Coppa's was a hangout for writers including Gelet Burgess, Frank Norris and Jack London, and California landscape painters Xaiver Martinez and Arthur Frank Mathews.

"People would come to Coppa's to watch the young intellectuals, writers and artists exchange repartee," says San Francisco State Humanities Professor Marvin Nathan. "They had a great table in the center of the restaurant. Jack London cut an extremely heroic figure."

Oddly enough, a writer had scrawled on a wall, "Something terrible is going to happen." Early in the morning of April 18, a 7.8-magnitude earthquake hit the city.

All but one of San Francisco's theaters were destroyed. And Coppa's -- the restaurant that had been the center of a bohemian artists scene -- burned down, as did the studios of many artists. The photographer Carleton Watkins lost all of his work. Watkins never recovered from the shock. Four years later he was committed to a psychiatric hospital and died there in 1916.

Some of the artists faded into obscurity because they lost much of their work in the disaster, says Scott Shields, the senior curator at the Crocker Arts Museum in Sacramento.

William Keith, an internationally recognized landscape painter, lost 2,000 works in the fires, much of his life's work. Keith spent the last five years of his life trying to repaint what he'd lost.

With the destruction of Coppa's the thriving Bohemian scene dissipated, San Francisco State's Nathan says. For three years, the city was a "pretty desolate place to be," he says.

But, the performing arts began to reemerge quickly. Local producers set up tents and staged performances for a weary but grateful audience. The city may have gotten its biggest boost a month after the earthquake. The French actress Sarah Bernhardt did a free performance of Phedre for more than 5,000 survivors at the Greek Theater on the University of California Berkeley campus.

Other performers followed Bernhardt's lead. They gave benefit performances around the country. Within four years, most of San Francisco's theaters had been rebuilt. In 1910, another famous friend of San Francisco, the opera star Louisa Tetrazzini, gave a free concert to thousands of people in the midst of a rebuilt downtown. She stood in front of Lotta's Fountain -- one of the few structures untouched by the earthquake -- and sang "The Last Rose of Summer."

San Francisco was back. But its culture had changed. The Bohemian artists and writers' scene wouldn't really return until the 1940s, with the emergence of poets like Robert Duncan and Madeline Gleason, followed by the beat poets of the 1950s. The theaters were booming, but the Barbary Coast with all its quirkiness had vanished.

Still, most San Franciscans feel their city retains the diversity and character born of the Gold Rush culture. And it remains a city that loves its arts.

Jack London and the Great Earthquake and Fire
Jack London: The Story of an Eyewitness
Watch a Trailer to the Film 'San Francisco' (1936)