Accessibility links
The Universe Shifts as Couric Moves up the Dial Katie Couric jumps and the nation holds its breath.

The Universe Shifts as Couric Moves up the Dial

The Universe Shifts as Couric Moves up the Dial 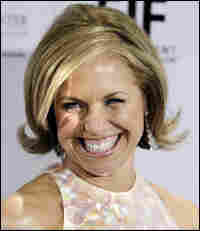 Katie Couric, seen at a fundraiser in New York, March 15, 2006, will join CBS, where she will become the first woman to anchor an evening newscast on her own. Reuters hide caption

This morning we say goodbye to Katie Couric's legs. The invariably-described-as-perky morning host of the Today Show will soon be tucked behind a safe anchor's desk at CBS... firmly protected by a hair helmet.

Or maybe not. The drama here isn't about how Katie will read the news (she'll be fine) but how producers at CBS will try to remake the newscast. I wouldn't be surprised if she's doing the CBS Evening News from a Katie-friendly set with a couch and easy chairs, a tasteful rug and knick-knacks on the fake shelf. Perhaps, after the news from Iraq, she can go outside and greet the entire Kaplan family from Sandy, Utah.

Okay, that was a cheap shot. There will be lots of hand-wringing today about how Couric's job jump means a triumph of entertainment over news. But NPR's media guy, David Folkenflik, reminded me last night that Tom Brokaw hosted the Today Show, too. And even Edward R. Murrow interviewed Liberace. News became show business a long time ago and Katie's just following a well-worn path.