Accessibility links
Nintendo Offers Video Games to Boost Brain Power In Japan, Nintendo has offered a series of unorthodox video games that, the company says, makes your mind sharper. This month, Nintendo is releasing an American version called "Brain Age." NPR's Robert Holt says that playing it makes him feel smarter -- but he's not sure if it actually makes him smarter.

In Japan, Nintendo has offered a series of unorthodox video games that, the company says, makes your mind sharper. This month, Nintendo is releasing an American version called "Brain Age." NPR's Robert Holt says that playing it makes him feel smarter — but he's not sure if it actually makes him smarter. 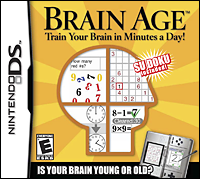 Brain Age is predicated on the idea that your brain is a muscle that needs training like any other muscle. hide caption

Nintendo is trying to broaden its audience. In Japan, it's done that by offering a series of unorthodox videogames the company says make minds sharper. Nintendo hopes that even if you aren't interested in sports or action games, you'll buy a portable Nintendo DS to feed your brain. Such games have sold over 5 million copies in Japan. This month, Nintendo's releasing an American version called Brain Age.

NPR's Robert Holt has a review.

ROBERT HOLT: Do you know the game Memory, where you have a bunch of picture cards turned facedown and the idea is to turn over two at a time in matched pairs? Well, a few years ago, I was playing that game with my 10-year-old nephew and he absolutely crushed me.

It was then that I realized my brain isn't as sharp as it once was.

The game Brain Age attempts to remedy this situation. When I first played the game, it tested me to figure out my brain age, the relative age of my mental abilities. First, the Stroop test. The names of colors are flashed on the screen, and I needed to say the color of the word, not the word itself. For example, the word red is written in blue letters, and you have to say the word blue.

This is a lot more difficult than it sounds. Okay, I can do this.

Yellow, red, blue, black, red, no black. After this debacle and several other tests, the floating head of a Japanese man, the game's mascot, told me that my brain age was 70. Yikes. I've got 30+ years to go before I'm 70. The idea for Brain Age is based on research by Japanese neuroscientist Rota Kawashima (ph), the floating head mascot. He believes that your brain is like a muscle, and you need to exercise it if it is to remain sharp.

According to Kawashima, if you train daily with your Nintendo DS, you can lower your brain age to the ideal 20. You write answers on the touch screen and speak into the built-in microphone.

My wife Liza isn't into videogames, but she's addicted to Brain Age. Your work and results are compared with whoever else is playing the same cartridge. Liza is an artist, so when I had to draw Queen Elizabeth from memory, compared to my drawing, her beautiful picture made my attempt look like a halfshaken EtchA- Sketch. Yeah, but I draw a mean Florida with the Keys. We are in fierce competition. I beat her at the memorization test and she always crushes me in calculations.

Once, she held a conversation with me while flying through 100 math problems and she still got a record. Showoff.

So does the game make you smarter? It's hard to say, but during the first week, we actually felt sharper. Maybe we were imagining it. When I do the crossword puzzle, the answers seem to come more quickly. Either we are getting sharper or simply getting better at the specific tasks in the game.

We've been playing nearly every day for three weeks now. Yesterday, we took the test again. Our brain ages are now in the upper 20s. The game does have its flaws. The handwriting and speech recognition aren't perfect. I had to change the way I write my fours, and it didn't recognize the way Liza says the word red, and the cheery, ever-present, disembodied head of Kawashima-son is starting to get on my nerves.

Despite these minor flaws, the game is fun, even if you're not into videogames. If you like puzzles and SuDoku, you'll get a lot of enjoyment out of Brain Age. The only problem now is when I want to play a game, many times I'll find that Liza's playing Brain Age. Maybe it's time she gets her own DS. I never thought I'd see the day.

BLOCK: Brain Age for the Nintendo DS is new this month. Our reviewer is NPR's Robert Holt.