Accessibility links
'Ghost Wars': The Inner Workings of al-Qaida Statements from al-Qaida mastermind Khalid Shaikh Mohammed detailing the inner workings of the terrorist group played a key role in the trial of convicted terror conspirator Zacarias Moussaoui. Madeleine Brand discusses those statements with Steve Coll, author of Ghost Wars: The Secret History of the CIA, Afghanistan, and bin Laden, from the Soviet Invasion to September 10, 2001.

Statements from al-Qaida mastermind Khalid Shaikh Mohammed detailing the inner workings of the terrorist group played a key role in the trial of convicted terror conspirator Zacarias Moussaoui. Madeleine Brand discusses those statements with Steve Coll, author of Ghost Wars: The Secret History of the CIA, Afghanistan, and bin Laden, from the Soviet Invasion to September 10, 2001.

Former New York Mayor Rudolph Giuliani is testifying today at the Zacarias Moussaoui trial. He's recounting what he saw on September 11 when the World Trade Center was hit by the planes. Jurors are deciding whether Moussaoui should die for conspiring with the 9/11 hijackers. They're also expected to hear audio tape from the cockpit of United Flight 93 and testimony from family members of the victims.

It's unclear whether the tape from United Flight 93 will be made public beyond today's airing in the courtroom. But last week's CIA documents released in the penalty phase of the Moussaoui trial were made public for the first time. Statements made by the mastermind of the 9/11 attack, Khalid Shaikh Mohammed, offer new insight into the inner workings of al-Qaida. Steve Coll is author of the book Ghost Wars: The Secret History of the CIA, Afghanistan and bin Laden, from the Soviet Invasion to September 10, 2001. And he joins us now. Welcome to the program.

BRAND: Now, these pages were a written account of statements that Khalid Shaikh Mohammed made under interrogation. What is new? What did you learn from these pages?

Mr. COLL: Well, some of this had been described at second hand before by the 9/11 Commission. But essentially he provided during his interrogations a detailed account of his interactions with Osama bin Laden and other al-Qaida leaders as he developed and then field managed the 9/11 plot.

And in particular he talked about targeting. For instance, it seems clear now that the Flight 93 that crashed in Pennsylvania because of the actions of the passengers aboard was headed for the Capitol, not the White House. That had been a source of some confusion. I have to say, one issue with these Khalid Shaikh Mohammed statements is that there's been an acknowledgement by the Bush Administration that they used aggressive interrogation methods against Khalid Shaikh Mohammed.

The Bush Administration argues that these methods stopped short of a legal definition of torture, but they apparently did include methods such as water- boarding, which involves simulated drowning techniques to persuade the subject of an interrogation that their life may be in jeopardy and they should talk.

At the end of that period, Mohammed had given his interrogators extensive statements, but later it turned out that many of those statements were lies and he, under more congenial circumstances, revised his original accounts. And it's not clear whether the documents submitted in the trial represent this later generation of statements or the first generation.

BRAND: Now, in this document he talks about all sorts of things. First of all, he talks about, as you say, the list of targets during the 9/11 attacks. He also talks about a second wave of attacks. And can you talk about that?

Mr. COLL: This whole plot began with a brainchild of Khalid Shaikh Mohammed. And let's remember, Khalid Shaikh Mohammed is the uncle of Ramsey Yusef, who carried out the first bombing attack on the World Trade Center in 1993. After Ramsey Yusef was arrested in 1995, Khalid Shaikh Mohammed remained free. And he continued to think big about these kinds of terrorists strikes. But he had no particular relationship with Osama bin Laden at that time. He sought bin Laden out in '97 and proposed a very grand plot to hijack perhaps a dozen or more planes in the United States, attack a variety of targets. Not only those that were actually struck on 9/11, but others on the West Coast, nuclear power plants.

And in Khalid Shaikh Mohammed's original formula, he was going to take the last plane down to the ground, land it and make all sorts of demands on bin Laden's behalf. Bin Laden listened to this plan and he said that's too much, but later he invited Mohammed back and approved a scaled down version of the original grand vision. Mohammed continued to harbor dreams of the original plan, and so there was a second wave, according to him, that was based on his original outline. Now, whether bin Laden ever really imagined carrying out that second wave isn't clear, but there does seem to be evidence in the case of Moussaoui that at least a few back up or follow-on hijackers were organized by Mohammed to consider carrying out additional strikes after September 11.

BRAND: One of them being Moussaoui?

Mr. COLL: That's Khalid Shaikh Mohammed's version. And this is a very interesting sort of mystery that's raised by the penalty phase in Moussaoui's trial. Moussaoui at times has claimed that he was meant to participate in the September 11 attacks, but the purpose of Khalid Shaikh Mohammed's testimony apparently has been to indicate that no, no, we never really saw him as a 9/11 hijacker, we saw him as a follow-on hijacker.

BRAND: And in fact Khalid Shaikh Mohammed in this testimony says he didn't really like Moussaoui, he didn't trust him, and he complained that Moussaoui disobeyed him, and he was overruled by bin Laden.

Mr. COLL: In fact, it's easy to imagine why Khalid Shaikh Mohammed might have reached that conclusion about Moussaoui, having witnessed Moussaoui's behavior in the courtroom. Not only is he disruptive and erratic in his outbursts and his statements, but he's very independent minded and he seems to have a vision of himself as a kind of autonomous Jihadist.

BRAND: Well, given the totality of all these statements, do they at all challenge or undermine or contradict the notions we had previously about how al-Qaida is structured and how it operates?

Mr. COLL: No, I don't think so. I think that, first of all, Khalid Shaikh Mohammed's account of how al Qaeda operates at the inside is consistent with other accounts. It was a corporate organization that did have clear management, strong management from bin Laden, it had management committees. In fact Khalid Shaikh Mohammed's account of his role is that of a middle manager in that he's manage up and he's trying to manage his boss, keep bin Laden off of his back, keep bin Laden from messing around with what he thinks of as the integrity of the 9/11 plot, and at the same time he's trying to keep the morale of his subordinates up in the field by giving them the space and the trust that he thinks they need to carry out the job successfully.

And he's got temperamental colleagues in both directions. Both his supervisor and his field operatives challenge him and give him trouble from time to time, at least by his telling. Now, we have take all of this with a grain of salt. We can imagine Khalid Shaikh Mohammed with a lot of time on his hands in captivity, telling this story again and again to his fascinated interrogators, and increasingly he is the center of the narrative. And unfortunately the only really full narrative we have of the 9/11 plot is that in which Khalid Shaikh Mohammed is the storyteller and the central character. In a perfect world we would have Osama bin Laden's version of this narrative and that of Ayman al-Zawahri and then we would have a fuller picture of how this plot was conceived and executed.

BRAND: Steve Coll is author of the book Ghost Wars, the secret history of the CIA, Afghanistan, and bin Laden from the Soviet Invasion to September 10, 2001. And he's also a staff writer for the New Yorker magazine. Steve Coll, thank you for joining us. 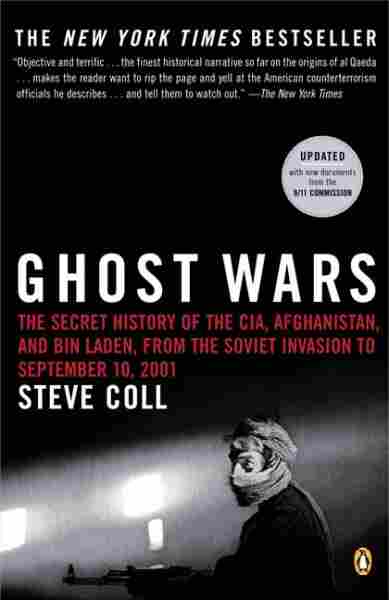 The Secret History of the CIA, Afghanistan, and bin Laden, from the Soviet Invasion to September 10, 2001

Title
Ghost Wars
Subtitle
The Secret History of the CIA, Afghanistan, and bin Laden, from the Soviet Invasion to September 10, 2001
Author
Steve Coll