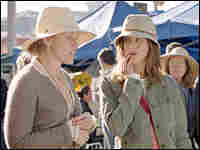 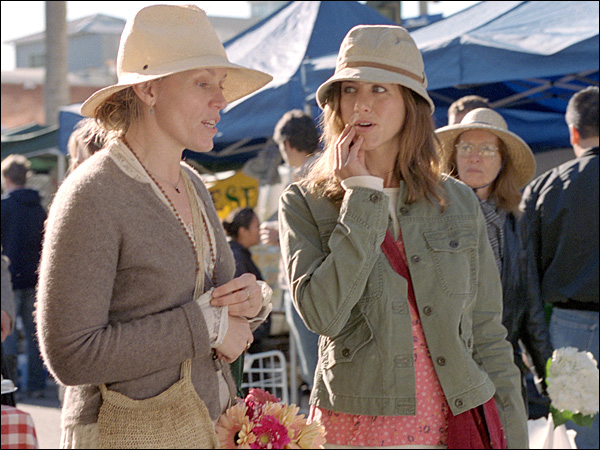 Jennifer Aniston (R) as Olivia and Frances McDormand as Jane.

Next we're going to learn about the work of a writer-director whose films show a gift for eavesdropping on contemporary life. Nicole Holofcener's first two films were called Walking and Talking and Lovely and Amazing. Those are the film titles, by the way, not review blurbs. Los Angeles Times and MORNING EDITION film critic Kenneth Duran says her new movie is just as insightful.

Friends with Money is an exquisitely calibrated and very modern comedy of manners. It stars four wonderful actresses: Catherine Keener, Jennifer Anniston, Frances McDormand, and Joan Cusack, as four Los Angeles friends who have issues with the love and money in their lives.

(Soundbite of move, "Friends with Money")

UNIDENTIFIED WOMAN #1: Oh, that reminds me, did you guys find a place to donate your money? Because I thought of a couple of ideas.

UNIDENTIFIED WOMAN #2: Yeah, we just decided we're going to give it to Tammy's school.

UNIDENTIFIED WOMAN #3: Yeah. How much?

DURAN: Friends with Money is a quiet but devastating ensemble piece. Both acerbic and sweet, that joins empathy with a great sense of comic timing. In fact, writer-director Nicole Holofcener holds such a clear mirror to modern times that it's not too much to call her the Jane Austin of Los Angeles.

The film's characters have the very specific reality that is essential to make them universal. As Holofcener has said, self-loathing, narcissism and pain is not limited to Los Angeles. It is one of Friends With Money's jokes with itself, that Olivia, the friend with the least money, the least promising romantic life, and least fulfilling job, is played by America's sweetheart, Jennifer Aniston.

(Soundbite of movie, "Friends with Money")

Ms. JENNIFER ANISTON (Actor): (As Olivia) Franny, if you had to work, then what would you do?

Ms. JOAN CUSACK (Actor): (As Franny) I feel I work. I feel like taking care of my kids is work.

Ms. ANNISTON: But you have full-time help.

Ms. CUSACK: That's true. Are you trying to make me feel bad?

DURAN: While Olivia has neither a boyfriend or disposable income, her trio of married and moneyed friends find their relationships in varying states of disarray.

Hardly housewives, and not quite desperate, these women find that their plentiful creature comforts haven't made them nearly comfortable enough. The film is acted with real comradery by actors who embody the essence of their characters. They know how to convey the friendship and love that exists between women who never hesitate to dish one another in private.

(Soundbite of movie, "Friends with Money")

UNIDENTIFIED WOMAN #3: When did you start working with this fabric?

UNIDENTIFIED WOMAN #2: It gets little holes in it though.

UNIDENTIFIED WOMAN #2: Its looks cuter when it gets little holes.

UNIDENTIFIED WOMAN #3: Jesus, not when you're paying $800 bucks for it.

UNIDENTIFIED WOMAN #2: Well you're not paying for it.

UNIDENTIFIED WOMAN #3: No. I didn't, I didn't mean anything by that.

UNIDENTIFIED WOMAN #2: I know it's overpriced, but it has to be.

UNIDENTIFIED WOMAN #3: I'm paying for mine.

UNIDENTIFIED WOMAN #3: I will!

UNIDENTIFIED WOMAN #3: Why shouldn't I?

UNIDENTIFIED WOMAN #2: Because it's a gift!

DURAN: Friends with Money understands, better than most films, the difficulty and tentativeness involved in creating and sustaining relationships with friends and spouses.

But what it finally wants to say is that other people are all we have. "I don't know what I'd do without you guys," the most difficult friend says at one point, and despite evidence to the contrary, she truly means it.