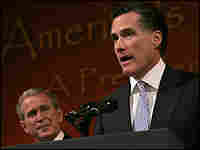 Gov. Mitt Romney introduces President Bush at a Republican Governors Association dinner in February 2006. Romney now has before him a bill that would require all Massachusetts citizens to have health insurance. Dennis Brack-Pool/Getty Images hide caption

This week, Massachusetts enacted legislation to provide health insurance for virtually every citizen within the next three years. Gov. Mitt Romney says he'll sign it into law. The measure would be the first in the nation to require people to buy health insurance if they don't get it at work.

Under the plan, all but the smallest companies will face financial penalties if they don't cover their workers. The bipartisan plan is already being talked about as a national model.

House Speaker Sal DiMasi compares the new health law to the Mayflower Compact that the pilgrims wrote after they landed on Plymouth Rock in 1620.

"It was supposed to be a community of people where laws were made for the common wealth. That's why we became a commonwealth," he said.

"Nobody in Massachusetts will ever be turned away for health care," he says.

Gov. Romney, a Republican and a former businessman, bases his support on economics. When Romney became governor three years ago, a business colleague urged him to do something about the 500,000 or more Massachusetts residents without health insurance. Nearly nine out of ten are in working families.

After studying the problem, Romney says, he came away with a key insight: "People who don't have insurance nonetheless receive health care. And it's expensive."

Medical care for Massachusetts patients who lack health insurance is paid for by businesses. Companies -- mostly ones that already offer coverage to their employees -- subsidize a fund that pays for so-called "free" care when uninsured people end up in hospitals.

The governor's plan was endorsed by Democrats. And before long, it had attracted a coalition of business leaders and consumer advocates, insurance executives and clergymen, hospital CEO's and poor people.

After three years of work, only two legislators voted against the plan -- a carefully crafted, $1.3 billion bill that promises near-universal coverage.

The law says people earning under three times the federal poverty level --- that's $29,000 a year for an individual --- can buy a state-subsidized health plan with no deductibles and rich benefits, including dental care.

In promoting the plan, Romney brushes off those in his party who attacked the plan as just another big-government scheme. He emphasized that those who can afford insurance should get it.

"Otherwise you're just passing your expenses on to someone else," Romney said. "That's not Republican, that's not Democratic, that's not Libertarian. That's just wrong."

Ed Haislmaier, of the The Heritage Foundation, a conservative Washington think tank, which helped frame the legislation -- agrees with Romney.

For proof of the plan's worth, Haislmaier says, critics should look at who passed it: a Republican governor and a Democrat-dominated House.

"I don't care what the name of the state is," Haislmaier says. "It just tells anybody in the street there must be something there if you can get that to happen."

After all, Haislmaier says, welfare reform didn't happen on the federal level until Wisconsin did it first.

Key Details of the Bill

Legislators say that by providing every Massachusetts resident with health insurance, the costs of health care are actually lowered.

For instance, the way the system works now, employers who offer insurance also have to pick up part of the tab for the cost of care for the uninsured at hospitals. By having more employers provide insurance, and having fewer uninsured people, these costs to employers go down. Analysts also say that adding more healthy people -- who use less care -- into the insurance system keeps deductibles and premiums down for all.

A look at how the bill would affect employers and individuals:

-- Those below 300 percent of the federal poverty level (about $38,500 for a family of three), but not eligible for Medicaid, will have their private insurance plans subsidized at a sliding-scale rate.

-- Children whose families earn below 300 percent of the federal poverty level (FPL) will be given free coverage through Medicaid.

-- Individuals with incomes below the FPL ($9,600) will have premiums waived on private insurance. (Currently most childless adults, no matter what their income, are not eligible for coverage under the state's Medicaid plan.)

-- Those who can afford insurance will be increasingly penalized for not buying coverage. In the first year, they'll lose their state personal income tax exemption.

-- Family coverage will be extended to cover young adults up to the age of 25.

All employers who have more than 10 employees must contribute to employee health-care costs.

-- Employers who don't provide insurance will pay an annual fee of $295 per full-time employee.

Massachusetts May Require Health Insurance for All April 5, 2006