Accessibility links
Mole-Rats, Ants Making Science Headlines Ants that limbo... lazy, sex-hungry mole rats.... and a parasitic worm that slithers out nostrils. All attracted the attention of serious scientists this week. The latest from the annals of strange-but-true animal research.

Ants that limbo... lazy, sex-hungry mole rats.... and a parasitic worm that slithers out nostrils. All attracted the attention of serious scientists this week. The latest from the annals of strange-but-true animal research. 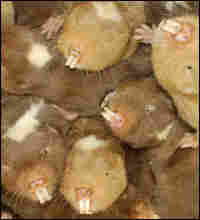 Damaraland mole-rats. Just like we, they want to be... close to each other. Nudge, nudge, wink, wink. T. Jackson hide caption 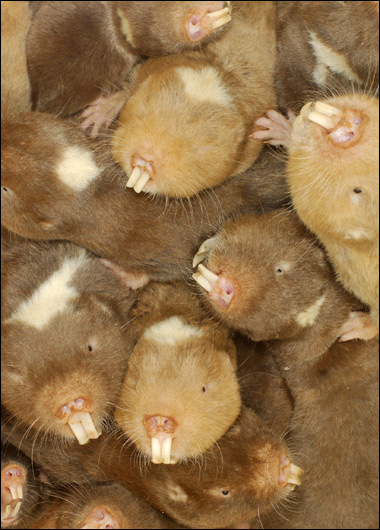 Damaraland mole-rats. Just like we, they want to be... close to each other. Nudge, nudge, wink, wink.

And now strange but true developments in the world of animal research. NPR's John Nielsen reports dancing ants, disgusting worms and the world's laziest mole-rats have the attention of serious scientists.

Everybody knows that worker ants can run flat-out all day with giant loads of food on their backs, but can they do this and also dance the limbo?

NIELSEN: Scientists want to know. Some say the answer could help them build walking robots that move more efficiently. Insect experts didn't used to think they had a lot to offer the scientists. Tobias Seidl at the University of Zurich says that's because nobody thought fast-moving ants were smart enough to bend and stretch their way under low-hanging obstacles without first slowing down to check them out.

NIELSEN: That was before Seidl built an ant maze in the deserts of Tunisia and filled it with teeny weenie limbo bars and tunnels with low ceilings. Tunisian ants ran through this maze like it was a racetrack, he says. Often he would see an ant go hurtling toward what seemed to be a certain smashup.

Professor SEIDL : And all of a sudden, bends all the leg joints in order to lower the body like you would when in car with a low-rider(ph). It's a quite an impressive sight.

NIELSEN: Once the ants got out from under the barriers, they popped right back up into the air again like good limbo dancers are supposed to do. Seidl described his work at a meeting of the Society for Experimental Biology in London. Other scientists will now try to translate what he's learned into mathematical formula that keep fast-moving robots from crushing their heads on low ceilings.

Michael Scantlebury of the University of Pretoria says there are two different kinds of male Damaraland mole rat. One kind does absolutely everything required to keep the colony going. Scantlebury generously refers to the other kind as infrequent workers.

Professor MICHAEL SCANTLEBURY (University of Pretoria): The infrequent workers have energy expenditures that are suggesting that they're doing almost absolutely nothing.

NIELSEN: How these lazy mole rats get away with doing almost absolutely nothing used to be an open question, but in the current issue of the journal Nature, Scantlebury says he's got the answer. He says it helps to think of these rats as teenagers who will someday give you grandkids.

Professor SCANTLEBURY: They steal your food and they nick things out the fridge, but then you tolerate them because you think, well, at least teenagers eventually are gonna be my means of pushing my genes to future generations.

NIELSEN: Scantlebury's found that the lazy mole-rats do get motivated sometimes, and it turns out that they do it for the same reason as teenagers: sex. After extremely rare desert rainstorms, the lazy rats will tunnel furiously toward other colonies, looking for female mole rats willing to provide them with infrequent workers of their own.

Scantlebury says there are some downsides to the life of lazy mole rats, however. One is that you can dig forever and not find a mate. Also there's a 95 percent chance that you'll be eaten by a snake.

Professor SCANTLEBURY: It makes you think twice about leaving home, you know. Maybe it's better to stay with mom.

NIELSEN: The final item in today's report needs to come with a caveat. If you dislike stories about parasitic worms that slither out of the noses of frogs, put your hands on your ears and say, la-la-la-la-la-la for about 90 seconds. You ready? Okay.

The parasitic worm in question has been studied for years by Frédéric Thomas of the French National Center for Scientific Research. Thomas says this worm gets inside insects like crickets and then starts growing until it occupies everything except the head and the feet.

Dr. FRÉDÉRIC THOMAS (French National Center for Scientific Research): It's a huge worm if we compare, all things being equal, it's like if you had a worm of 12 meters inside you.

NIELSEN: For the metrically impaired, that's roughly 39 feet of worm, and that's not the worst of it. According to Thomas, these worms somehow drive the crickets to commit suicide by drowning themselves.

Dr. THOMAS: In fact, you see the insect arriving from the forest and now jumping into the water, and then a huge worm emerging, and then the worm swim, searching for a sexual partner.

NIELSEN: In Nature magazine, Thomas reports that fish and frogs sometimes eat drowning crickets before the worms inside them can make their exit. First, he says, it looks like cosmic justice is being served, but then the worms turn, literally, and begin to slither out of the frog's mouth or nose.

Dr. THOMAS: And it's not funny for the frog. He's obviously surprised, thinking that he was eating a cricket and not a bag with a worm inside.

NIELSEN: This worm is the first parasite known to be able to escape from a predator by crawling out of its nostrils. With luck, we will never find a second one. John Nielsen, NPR News, Washington.