Listen
Crocheting with 'The Happy Hooker' 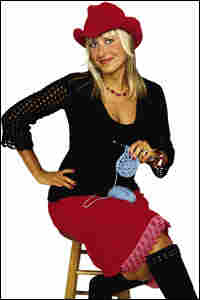 On designer runways and across the pages of fashion magazines, crochet garments appear to be what to wear this spring. Although you may not be able to compete with the likes of Prada and Chanel, it is possible to create something wearable with a hook, a ball of yarn, and a new book by Debbie Stoller.

Stitch and Bitch Crochet: The Happy Hooker contains some clever ideas as well as basic instructions. So with the book, a hook, some yarn, and producer Jesse Baker, I went into a studio to see how crafty I could be.

Ms. JESSE BAKER (NPR producer): Close your lower three fingers around the yarn like that.

Ms. BAKER: Dip your pointer finger under the strand of yarn so that it runs over the top of your second knuckle. Like that.

With your left thumb and middle finger, hold on to the base of the slipknot.

Ms. BAKER: Now you're in the right position for crocheting.

HANSEN: I feel like I'm in the right position for finger yoga.

Ms. BAKER: Look at what you've got, a nice, stable little triangle made with your hands, hook, and yarn.

HANSEN: Not in this universe. Oh, I've totally messed it up. All right. I'm going to try this again. All right.

HANSEN: Was that the most basic one?

Ms. BAKER: That's the most basic.

HANSEN: I think she's going to have to teach us.

HANSEN: You know, I've tried my hand at knitting. I managed to make a few scarves for my dolls when I was a kid. But I tell you, crocheting was escaping me. I had trouble getting that first stitch after the slipknot.

How easy is it, really?

Ms. STOLLER: Oh, well I'm sorry to hear that you had a rough time with it, because mostly people find crochet to be much easier than knitting. When you're crocheting you just have a hook and a ball of yarn, so it's two things, and you have two hands, most people have two hands so that works out well for a lot of folks.

When you're knitting you've got two needles and a ball of yarn, which is three things that you're juggling in two hands, and just that can make it a little bit more complicated.

Also, when you're crocheting you're pulling a loop of yarn through another loop with a hook. When you're knitting you're doing the same thing with a pointed stick. And I just like to ask people, you know, if you were drowning in the water somewhere and someone came to rescue you, would you rather that they lowered a hook for you to pull yourself onto or a pointed stick? I think, you know, a hook is easier.

HANSEN: You're the editor of a popular New York-based women's magazine. You also have a Ph.D. from Yale in the psychology of women. Why write a book about crochet?

Ms. STOLLER: I'm so glad you asked me that. The magazine that I am the co-publisher and editor of is called Bust, and it's a feminist magazine for young women. And although I was raised doing all kinds of needlecrafts, because my mom's from Holland and Dutch people are practically born with knitting needles in their hands, I learned to do all these different crafts and always had a lot of respect for them.

But at a certain point I sort of realized that these needlecrafts were in general sort of stigmatized in our culture, looked down on a little bit. And as far as I could tell, the only reason they really had this bad image was because it was something that had traditionally been done by women. And as a feminist I wanted to try to change that. Because I thought all of these needlecrafts really deserved to get some credit and some value.

So now you can see how my editing a feminist magazine, getting this Ph.D. in psychology of women, and writing a book about crochet all go together. It's all sort of part of the same thing.

In fact, we started running crafts in Bust, in a feminist magazine, back in 1999. And the very first craft we ran was a crochet project, which sort of been the gateway craft that got me back into all of the needlework in a huge way, for me.

HANSEN: You have everything in this book, from like a bikini in a bag, to a knot ugly shrug. I mean, you spell it K-N-O-T, that's great. You know, purses, doormats. Where did you get the designs?

Ms. STOLLER: Well, in the book I've collected really wonderful patterns from 40 awesome women from all across the country, of varying ages and lifestyles. Most of them are not professional crochet designers. A few are. But all of them were just women with an idea for something that would be really cool to make and crochet and the wherewithal to figure out how to get it done.

The selection that's in the book, I thought, really demonstrated the strength of crochet in all of its forms, and you know, has a lot of stuff for rank beginners to start with. You know, the first third of the book is all instructions, so that people who don't know how to crochet at all should be able to pick it up and then start making this stuff.

HANSEN: As long as they have patience.

Ms. STOLLER: A little bit. I mean, you know, you don't have to have the patience of a saint, but give yourself a little time as you would with anything else.

HANSEN: You have written a book about knitting.

HANSEN: Now you have a book about crocheting. What are you at heart? A knitter or a crocheter?

Ms. STOLLER: I'm neither. In the book I sort of say that I've discovered, over the years, that knitters and crocheters are a little bit like Sharks and Jets. I didn't realize this, because I grew up doing both. I guess you could say I'm like Maria, I have loyalties in both camps. And with this crocheting book I'm really hoping to build some bridges between the two communities.

There's plenty of people out there who do both. And there's also, of course, quite a number who do neither. But there are these big factions of people who only crochet and only knit and I'm really hoping that they can realize that it's worthwhile to do both. Because there's certain things that knitting is really great at, and then there's certain things that crocheting is really great at. And if you can do both, then you can really expand.

HANSEN: So what do you have up your sleeve for your next book, no pun intended?

Ms. STOLLER: I've got some yarns I'll be unraveling. No, it's, at the moment, it's a secret. But there's some cool stuff coming down the pike.

HANSEN: Yeah. You love all of this. And will it be as irreverent as your first two?

Ms. STOLLER: Hey, you know, that's just how I am. I've kind of corny. I've been accused of trying to make knitting and crocheting hip, but really I've just made it corny and silly. Fun.

HANSEN: Debbie Stoller is the editor in chief of Bust Magazine and the author of Stitch and Bitch Crochet: The Happy Hooker from Workman Publishing. She joins us from our studio in New York.

Debbie, thanks a lot.

Ms. STOLLER: Oh, thank you so much for having me. And I'd be happy to come down there and help you with your crocheting. 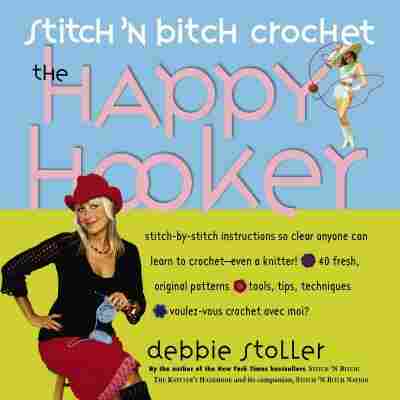