Accessibility links
Immigration Marchers Rally for Legalization Across the country this weekend, thousands marched in cities like Dallas, St. Paul and Des Moines to demand legalization for undocumented immigrants. On Monday, hundreds of thousands are expected to protest in more than sixty cities.

Across the country this weekend, thousands marched in cities like Dallas, St. Paul and Des Moines to demand legalization for undocumented immigrants. On Monday, hundreds of thousands are expected to protest in more than sixty cities. 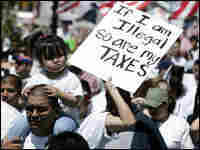 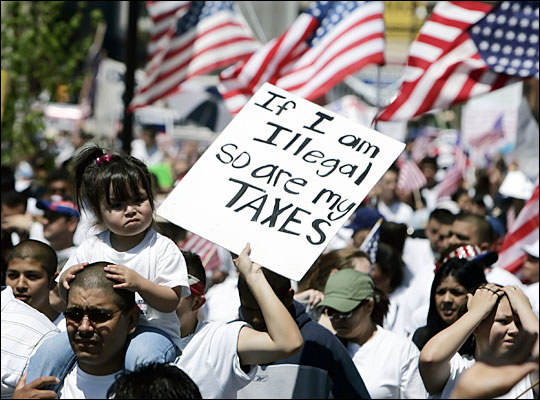 Demonstrators march in Dallas on April 9, 2006, protesting calling legalization of undocumented immigrants in the United States.

This is ALL THINGS CONSIDERED from NPR News. I'm Debbie Elliott. Another wave of demonstrations around the immigration issue today.

ELLIOTT: This was the scene in Dallas where tens of thousands marched on City Hall. Similar scenes are playing out in St. Paul, Des Moines and other cities. Tomorrow hundreds of thousands are expected in more than 60 cities. It's all part of a groundswell of sentiment, mostly from Hispanic groups demanding legalization for undocumented immigrants. NPR's Jennifer Ludden has been speaking with some of the organizers about the long-term goals of this movement and she joins us in the studio. Welcome Jennifer.

ELLIOTT: Let's start with the images we see from Dallas today. Downtown streets packed with protesters, most of them wearing white t-shirts and waving the U.S. flag. Is there some symbolism here?

Ms. LUDDEN: I think there's heavy symbolism. If you remember two weeks ago at the big demonstrations in L.A. there were some American flags and there were a lot of Mexican flags, flags from other Latin American countries. And this generated a lot of criticism. A lot of opponents of legalization tried to turn this against the marches, and so I think organizers now are very pointedly saying we're waving the American flag because this is the country we love and we want to be part of this country.

ELLIOTT: Who are the organizers? Who's behind all of this?

Ms. LUDDEN: You've got your advocacy groups that have worked with immigrants for years. You've got churches. We've got the actor Danny Glover recording a public service announcement that's going on radio stations in an effort to get African Americans out on the National Mall tomorrow in Washington.

It's very interesting and I think that we're seeing an effort on the part of the march organizers to reach out, for example, to the NAACP. The NAACP has put out a press release calling for legalization and eventual citizenship of undocumented workers. This is a very tricky alliance to form though. Because there are some in the African American community who worry that the presence of so many undocumented immigrants has depressed wages and may not favor a mass legalization.

You also have big involvement by unions. You may remember last year the AFL CIO had a big rupture and a number of unions broke away from it. The lead one was the Service Employees International Union and part of the their disagreement was how much to reach out to undocumented workers and unionize them. The AFL-CIO is very queasy about a guest worker program. The SCIU has embraced it fully. They see it, immigrants are the future of the unions in America and they are really grabbing hold of this movement and trying to get their people out in the street. In fact, here in D.C. the protest is scheduled for four o'clock tomorrow and, you know, they've got a lot of office workers who have to go clean buildings starting at six o'clock. The union has been calling up their employers saying, look, can you please give them some leeway? Can they show up a little bit late? And they say they've been getting a good response.

ELLIOTT: So Jennifer, what's the common goal of all these groups?

Ms. LUDDEN: Well, the immediate goal clearly is to legalize, have a mass legalization of the millions of undocumented workers and their families in this country. But organizers are adamant that they want this to outlast that. Say the legislation in Congress dies, they insist they're not going anywhere and the common cause as they see it is better conditions for the working class in this country, and they're hoping that this movement will outlast whatever comes out of Congress.

ELLIOTT: NPR's Jennifer Ludden, thanks so much.