Percussionist Don Alias died last month at the age of 66. He was known for maintaining his own unique sound while working with artists as diverse as Dizzy Gillespie, Miles Davis, and Joni Mitchell. Felix Contreras, himself a percussionist, looks at the lasting impact of Alias' musical work. 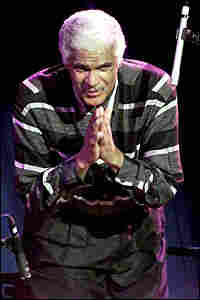 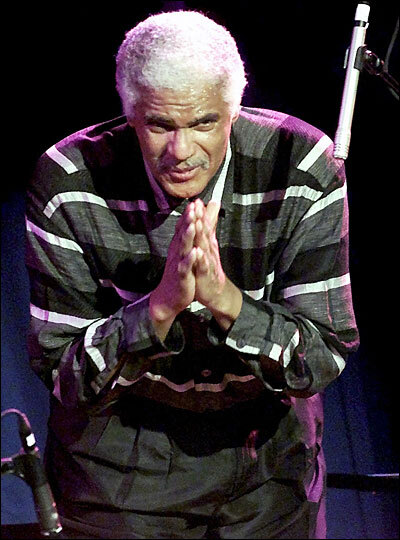 Percussionist Don Alias bows as he is introduced by jazz legend Chuck Mangione at the Blue Note, Las Vegas, in November 2005.

Percussionist Don Alias added that certain something to music that's more felt than heard. He added colors, textures and extra beats that could make a pop tune really snap. His congas, bells, shakers and gourds were employed by singers and instrumentalists alike. Joni Mitchell, Roberta Flack, and Carlos Santana are just a few. Don Alias died recently. NPR's Felix Contreras is also a percussionist, and he has this appreciation.

Session musicians spend a lot of time waiting for the phone to ring. One of the calls Don Alias got early in his career landed him a spot in jazz history.

CONTRERAS: Miles Davis hired Don Alias to play percussion on the trumpeter's groundbreaking Bitches Brew album. Alias once told an interviewer that at one point neither Jack DeJohnette nor Tony Williams could master a certain groove Davis wanted. Alias mustered up the courage to suggest he give it a try, and apparently he got it.

Don Alias grew up in Harlem. His parents were from the Caribbean island St. Martin, and he showed an early talent for drumming. At 16 he landed his first professional gig with Dizzy Gillespie at the Newport Jazz Festival, but Don Alias also had a degree in biology.

His mother insisted he have something to fall back on if his career in music didn't work out, but he never got a chance to use his degree. He was simply too busy as a musician. He met bassist Gene Perla while in school in Boston, and together they formed a group called Stone Alliance in 1964. The two remained friends and collaborators for over 40 years.

Mr. GENE PERLA (Jazz Musician): I think his main contribution was his ability to fit into anything and still bring his own voice.

CONTRERAS: Perla says from the beginning, Alias' appreciation for all types of music made him stand out.

Mr. PERLA: For someone who can get on stage and play with Mongo Santamaria and then turn right around and play with Elvin Jones, that's pretty wide.

CONTRERAS: Don Alias reached a wide audience through his work with Joni Mitchell.

CONTRERAS: The percussionist was probably best known, however, as a featured member of saxophonist David Sanborn's group.

Don Alias played with Sanborn for almost two decades. On stage and in the studio, Sanborn says Alias' dedication to the most minute aspects of their music made everyone play better.

Mr. DAVID SANBORN (Saxophonist): When we were in rehearsals, he'd go from one day to the next, and he would say, you know, that thing we did yesterday? You know, I think if we did this and did this differently, and always on the gig, he was always talking about different ways to improve the music and to make it better, and that was really a consistent quality in Don throughout the years. He immersed himself 100 percent in the music, and he gave his all to the music.

CONTRERAS: Musicians will often tell you they're at a loss for words when trying to explain the experience of performing with other like-minded souls. They say the answer is in the notes or the beats. David Sanborn says he can't put words to the way he feels about losing his friend Don Alias. He says that will likely come through music as well.

Mr. SANBORN: It hasn't really hit me because in a very real sense he's still here. I'm sure I'll feel it on the first gig. I think that's when I'll really, you know, when it'll really hit home for me.

CONTRERAS: That moment may come at the end of this month when Sanborn and Alias were scheduled to go out on tour. Don Alias died March 28th. He was 66 years old. Felix Contreras, NPR News.