Accessibility links
Not All Seasons Are Created Equal : Krulwich Wonders... Seasonal equinoxes and solstices seem to divide the year into four equal parts, but if you live in the Northern Hemisphere, summer is five days longer than winter. A quick trip around the sun explains why.

Listen
Not All Seasons Are Created Equal 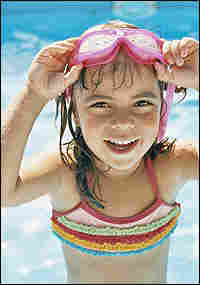 What's wrong with this sentence: "Winters are so long; thank God it's spring."

You can thank whomever you please, but winter isn't the longest season. It's the shortest.

Although the seasonal equinoxes and solstices seem to divide the year into four equal parts, when you count the days of what we officially call winter, spring, summer and fall, each season is different, says Bing Quock, acting chairman of the Morrison Planetarium at the California Academy of Sciences.

Quock figures it this way:

Which means, in the Northern Hemisphere what you might call "the getting warmer seasons" -- spring and summer -- are collectively seven days longer than "the getting colder seasons," fall and winter. So for people who like to take their sweaters off, living above the equator may be a slightly more pleasant place to be. (At least in principle. Not every spring day is going to be warm, and not every winter's day cold. Just think "on average.")

Below the equator, it's the reverse. Folks who live in Sydney and Santiago get seven extra days to put their sweaters on -- a "getting colder" advantage.

The explanation for why there's a difference in lengths requires us to take a radio trip around the sun (virtually, of course, in my radio piece, with sound effects that come entirely from my mouth plus a little boost from my engineer Manoli Wetherell).

Here's the explanation: If the Earth made a perfect circle round the sun, the seasons would be almost exactly equal.

But we don't circle. We do an elipse.

So in our 365-1/4-day tour, at some points we are close to the sun, at other times much farther away. And when we are close, we speed up, when we are far we slow down. (The sound effects make this very, very palpable.)

And it turns out that when the Earth is close to and zipping by the sun, when we are moving fastest in our annual orbit, that's the time of year we in the Northern Hemisphere call fall and winter. So those seasons go a little faster because our planet is very literally, moving a little faster. Then later, when the Earth gets away from the sun and starts to slow down, that's the time of year we call spring and summer. When we slow down, the seasons slow down, too.

Our radio explanation also includes two bits from an old Tin Pan Alley song by Yip Harburg (who wrote the lyrics for the Wizard of Oz score) and Vernon Duke, called "April in Paris" played by the Count Basie Band.

Some people may wonder why we in the Northern Hemisphere have our spring and summer when our planet is far away from the sun. (Equally confusing: our fall and winter come when we are near to the sun.) Shouldn't proximity to that nice warm ball of sunshine predict our seasons?

Because, it turns out the tilt of the Earth is more important than distance from the sun.

It's spring/summer in the Southern Hemisphere when the planet is tilting the other way and now the “lower” half is getting longer days and more sunshine.

Now you know. (Unless you already knew.)