Growing up in Sweden with Argentinian parents, Jose Gonzalez was just as likely to hear The Beatles in his home as bossa nova classics. These diverse influences are apparent in his songwriting and guitar playing on his debut album, Veneer. 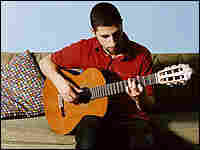 Gonzalez plays original compositions on Veneer along with putting his own spin on songs such as Joy Division's "Love Will Tear Us Apart" and Kylie Minogue's "Put Your Hand on Your Heart." His songs have gotten boosts from appearances on Fox's The OC and a popular commercial from Sony. Recently, he finished the U.S. leg of a world tour.