Accessibility links
Where the 10-Ounce Bud Is the King of Beers Ten-ounce cans of Budweiser aren't sold in many places in the United States. But in southern Maryland's St. Mary's County, the 10 is indeed the king of beers. Fans say beer from the smaller cans tastes better, stays colder longer, and that the cans feel better in the hand.

Listen
Where the 10-Ounce Bud Is the King of Beers 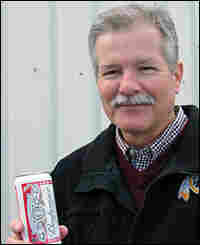 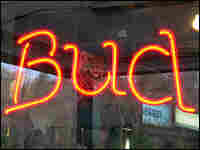 The sign at Buzzy's Country Store, where loyal fans of the 10-ounce gather at 4 p.m. for what they call the "four-to-five." Noah Adams, NPR hide caption

A guy goes into a bar and orders a Bud. The can arrives. If the label says 10 ounces instead of the usual 12, that beer drinker is most likely in Southern Maryland's St. Mary's County. The 10-ounce cans aren't sold in very many places in the United States. But in St. Mary's for the past 50 years, the 10 is indeed the king of beers.

In 1956, Anheuser-Busch, the brewer of Budweiser beer, introduced the 10-ounce to compete in price with locally produced 12-ounce beers. After the Budweiser Clydesdales arrived to parade at the county fair, sales of the 10s took off.

Today, the No. 1-selling beer in the area is Bud Light 10-ouncers, followed by regular Budweiser 10s. Fans say beer from the smaller cans tastes better, stays colder longer, and that the cans feel better in the hand.

But just because it's a smaller can doesn't mean it has a smaller price tag: The 10-ounce drinkers often pay a 12-ounce price. Budweiser will offer a discount on the 12, but hardly ever on the 10. At one local restaurant, for example, both the 12- and the 10-ounce cost $2.75.

Once or twice a week, a tractor-trailer arrives at the warehouse of the Guy Distributing Company from Houston, where the beer is brewed and canned. Glenn Guy, whose father and uncle founded the company, is a 10-ounce drinker himself, but he can't explain exactly what the difference is.

"There is none," Guy says, referring to the fact that all Budweiser is brewed in the same huge vats. "We've even had people with a taste-test situation, and they've been able to pick the 10-ounce out. But there's no difference, there can't be."

Guy's father helped lure the team of eight Clydesdale draft horses to the St. Mary's fair all those years ago, playing a dual role in getting the now-beloved 10-ouncers to this county on the Chesapeake Bay.