Accessibility links
A Tour of L.A.'s Skid Row Mean Streets Skid Row in downtown Los Angeles is "home" for thousands of men, women, and even children -- some estimates put the number as high as 10,000 on any given night. Farai Chideya takes a tour of the city's mean streets with the people trying to help. 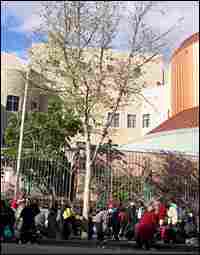 Homeless line up in the afternoon for space in an overnight shelter. Farai Chideya, NPR hide caption

The streets, sidewalks and alleyways of Skid Row in downtown Los Angeles are "home" for thousands of men, women, and even children -- some estimates put the number as high as 10,000 on any given night. 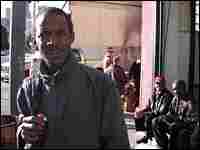 The sprawling 50-square-block area has become a growing irritation to downtown business owners, and it's slowing a luxury apartment boom in the city center. It is also a daily reminder of a huge need unmet.

City officials have an ambitious 10-year plan to transform Skid Row, in part by housing the homeless elsewhere in Los Angeles County. But the plans would take years to work, if they're implemented at all.

In the meantime, a core group of counselors, volunteers, health workers and police officers toil around the clock to create pockets of stability amid the chaos.

At night, many of the sidewalks in downtown -- mostly in the industrial and warehouse districts -- are lined with tents or makeshift plastic tarps. Many homeless are drawn to the area because of the cluster of homeless shelters, kitchens and public services, all just a stone's throw from the high-rise towers that anchor the city's financial heart.

For decades, those sad streets were given over to the city's least fortunate at night. But now a housing and business resurgence in downtown Los Angeles is making that real estate much more valuable.

The people living on the streets will probably never live in the new luxury lofts rising on once-blighted blocks, nor be able to afford to eat in the new, tony restaurants. They eke out a living as best they can, many of them surviving on monthly checks from the government.

There are bright points of hope -- the "School on Wheels," for example, where children find a haven of coloring books, toys and even computers. But hope on Skid Row is always tempered by pain. There are drug dealers and other human predators, and the well-meaning people who work to help the homeless must live with daily frustration.

Los Angeles County officials have a $100-million plan to place the homeless in shelters in outlying areas, and the city has a separate, $50-million plan to provide permanent, supportive housing that will get families off the streets.

But until then, a stretched-to-the-limit police force tries to keep the streets as safe as they can. Half the job involves compassion, the other half tough law enforcement.

Every day, the homeless face desperate choices, and questions that often have no answers: Where's the next meal? The next bed? Shelter from the rain? Treatment for addiction? Every day, there is a struggle to make sense of it all.