Accessibility links
Iran Moves Forward with Uranium Enrichment Iran says it is now enriching uranium for use in nuclear power and will ramp up the program in coming years. In Washington, there is talk of a military strike against Iran because of fears it will develop nuclear arms. Steve Inskeep talks to Matthew Bunn, a senior research associate at Harvard's Kennedy School of Government.

Iran says it is now enriching uranium for use in nuclear power and will ramp up the program in coming years. In Washington, there is talk of a military strike against Iran because of fears it will develop nuclear arms. Steve Inskeep talks to Matthew Bunn, a senior research associate at Harvard's Kennedy School of Government. 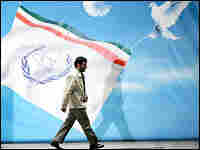 Iranian President Mahmoud Ahmadinejad walks away from the podium after a speech in Mashhad, Iran, on Tuesday in which he said the country would accelerate its nuclear program. IRNA/AFP/Getty Images hide caption 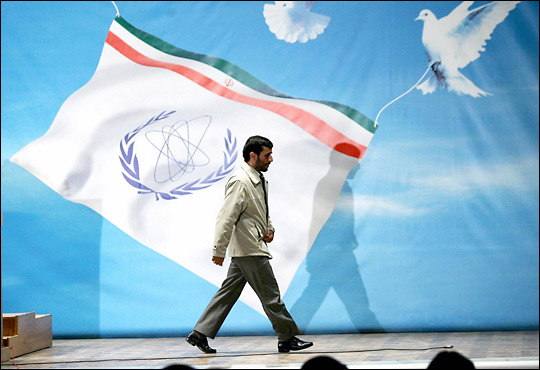 Iranian President Mahmoud Ahmadinejad walks away from the podium after a speech in Mashhad, Iran, on Tuesday in which he said the country would accelerate its nuclear program.

Now, Iran's president was giving his own talk yesterday. Mahmoud Ahmadinejad spoke to an audience of military commanders and clerics, and he said, I formally declare that Iran has joined the club of nuclear countries. By that he meant that Iran has enriched uranium to the point where it can be used in nuclear power plants.

INSKEEP: I want to try to make a distinction here. I thought that in order to join the nuclear club, you had to have an atomic bomb.

Mr. BUNN: That's the way the nuclear club is usually thought of, and Iran is still years away from that, even if diplomacy fails, and they decide to go in that direction. If these announcements are accurate, Iran has demonstrated that it can enrich uranium--at least for a short time on a small scale--and that is the same technology that could ultimately be used on a larger scale for produce bomb fuel, not just reactor fuel.

INSKEEP: And we should mention that Iran's deputy nuclear chief has said, today, that Iran tends to move toward large-scale uranium production involving tens of thousands of these centrifuges that are used to enrich uranium. Is that a development of concern?

Mr. BUNN: That would be a development of concern. He said that they plan to have 3,000 centrifuges in place. I, personally, am skeptical that they'll be able to do that. They have shown they can build and operate a small number for a short time. They haven't yet shown that they can turn out working centrifuges like sausages and operate them for the long periods of time that would be required to produce bomb fuel. This is, potentially, an important step along that road.

INSKEEP: And I suppose we should point out that the State Department has said it cannot confirm.

Mr. BUNN: That's right. We don't know for sure that they aren't exaggerating the step that they have succeeded in taking.

INSKEEP: Now, here's the next thing that's happening. United Nations nuclear weapons inspectors are in Tehran. Mohammed ElBaradei will be there this week. Will he have the kind of access necessary to find out if Iran is really doing what it says it's doing?

Mr. BUNN: Yes, and in fact IAEA has already confirmed that this 164 centrifuge cascade is operating. This is all taking place under IAEA inspections--what are known as safeguards. Iran has pulled out of a broader safeguards agreement that gives the inspectors access to a wider range of places and information, but the inspectors are still inspecting this facility that does this uranium enrichment.

INSKEEP: Well, now when you take all the information that's available Mr. Bunn, if we assume that it's a bad thing that Iran gets an atomic bomb, how worried should we be?

Mr. BUNN: I think there is very good grounds for concern. Iran has had a secret nuclear program for almost two decades now and only opened that program in the last couple of years. It's a program focused on technology that is the exact same technology you would use to produce nuclear weapons material...

INSKEEP: When you say, exact same, does that mean Iran now has everything that it needs to make a bomb other than time and some manufacturing facilities?

Mr. BUNN: Not necessarily. We know that they are working toward mastering the technology for producing the essential ingredients of nuclear weapons--that is, highly enriched uranium. Right now, they're only producing low-enriched uranium, but the difference between making the one and making the other is not as big as most people think. In fact, technologically, there's almost no difference. In terms of the technology they would use it's exactly the same. But what we don't know is how much progress they have made in what's known as weaponization, that is turning that highly enriched uranium into a bomb.

INSKEEP: And in just a couple of seconds, what do you think of the timing of Iran's president's announcement that they're part of the nuclear club? It came just after these news reports that the U.S. was preparing for the possibility of attacking Iran.

Mr. BUNN: Yes, I think it's most unfortunate. I think both sides are moving toward confrontation and it was--Iran has announced it's moving in exactly the opposite direction that the Security Council asked them in asking them to suspend their activities. I think it's time for both sides to step back from the brink and find face-saving solutions that will meet both sides' bottom line.