Accessibility links
Radio Operator Honored for Katrina Service One community radio operator managed to stay on the air during Hurricane Katrina. He is in Washington, D.C., to be honored with a federal award. He's also applied for an extension of his temporary permit to broadcast at higher power.

One community radio operator managed to stay on the air during Hurricane Katrina. He is in Washington, D.C., to be honored with a federal award. He's also applied for an extension of his temporary permit to broadcast at higher power. 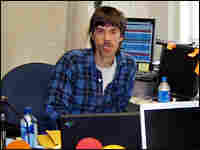 After Hurricane Katrina hit, Brice Phillips stayed on the air on WQRZ, serving as Hancock County, Mississippi's only link to the outside world. Pam Fessler, NPR hide caption

Every disaster has its heroes, and many residents of Hancock County, Mississippi think that Bryce Phillips is one of them. His tiny radio station, WQRZ, was the only link between the county and the outside world after the area was devastated by Hurricane Katrina. Today, Phillips is being honored by President Bush. It's a Small Business Administration ceremony in Washington, D.C. That honor is not stopping Phillips from thinking about what might happen in the hurricane season that is approaching, and he's wondering if he will have the ability to again broadcast throughout his county.

Mr. BRICE PHILLIPS (Chief Engineer, WQRZ-FM, Mississippi): And good afternoon, fine folks. Hi, how are you? My name is Brice. It's about...

In a small room packed with recording equipment, Brice Phillips is interviewing two members of the local Red Cross about the upcoming storm season.

Unidentified Man: Thanks for having us.

Mr. PHILLIPS: Oh, not a problem. Not a problem. Of course, we're here to talk about your preparedness events. And also, some other great things going on right here at the Gulf Coast Chapter of the Red Cross. Take it away, Pat.

FESSLER: In a folksy way, Phillips has been warning residents, along the Mississippi coast for weeks now about the possibility of more evacuations, and that taking their FEMA trailers would be a big mistake.

Unidentified Man: Well, it would. And, you know, what you're really worried about is if one those gets involved...

Mr. PHILLIPS: Or it gets blown over by 35 mile an hour winds.

Mr. PHILLIPS: Or much less, plug up the highway with everybody else coming out of New Orleans.

FESSLER: Phillips says he's hyperactive, and is on disability because of it. But for the radio station, he works almost non-stop. He's a wiry 40-year-old, but looks much younger with his shaggy haircut and eager face. Right now, Phillips lives in a FEMA trailer behind the county's Emergency Operation Center where his station is located. He used to broadcast from his house in Bay Saint Louis, but that was destroyed.

Mr. PHILLIPS: My house is at 14 foot above sea level. And when I heard that we had wave heights of 40 to 60 foot off the mouth of the Mississippi at one of the buoys out there, I said oh, time to go.

FESSLER: So, he packed his radio gear and headed to the Emergency Operation Center. That way, he figured, he could stay on the air.

Mr. PHILLIPS: I think I was climbing in 70 mile an hour winds, going up there, to get the one antennae off so I can move it. You know, and then put it back up.

FESSLER: For days, WQRZ and Phillips' ham radio operation were the county's only source of communication.

FESSLER: Power was out. Phone lines were down. FEMA handed out 3,500 portable radios, so residents would know what was going on.

Ms. SARA ALLEN (President, Ciara Enterprises Inc.): There was a lot of information to convey. And having the radio station associated with the Emergency Operation Center, gave us a very good ability to take that information and disseminate it.

FESSLER: Sarah Allen, a consulting engineer from Florida, came to Mississippi right after the storm to help WQRZ stay on the air. She says Phillips did some remarkable things, like when Hurricane Rita came, and the station's generators ran out of fuel.

Ms. ALLEN: Brice took it upon himself to float 10 gallons of diesel fuel, wading through waist-deep water; and this wasn't clean water, this was Mississippi floodwater, which is pretty dirty, to refuel the generators. So, he made certain that the people in Hancock County had access to that emergency alert information.

FESSLER: While she was there, Allen also asked the Federal Communications Commission to give WQRZ special temporary authority to increase its signal strength, so its broadcast could be heard throughout the county. Its usual radius is about three miles. WQRZ got the authority, but it expired last month. And now, Phillips is trying to get an extension. He sent petitions, signed by hundreds of residents, and testimonials from local first responders.

Peter Doyle, an FCC official says the commission is considering WQRZ's request, and that until a decision is made, Phillips can still broadcast using the higher power. Doyle adds that the commission has a track record of being sympathetic to emergency conditions.

Even so, Phillips is nervous.

Mr. PHILLIPS: Nobody else is doing what I'm doing here. Nobody. You know, with all the interviews and keeping them informed, that's why everybody is so happy around here. It's really great. You got to serve the people in your community. That's what you do. That's why I didn't run, run away during the storm.

FESSLER: He says in Hancock County, at least, the emergency is far from over. The next storm could be right around the corner.