Accessibility links
Flaming Lips Stay True and Reach Out with 'Mystics' Commentator and music journalist Ashley Kahn talks to members of The Flaming Lips about their music and their latest album, At War with the Mystics. For more than 20 years the band has been a cult favorite. Kahn explains how their new effort maintains a spirit of experimentation, while earning them a shot at mainstream popularity.

Listen
Flaming Lips Stay True and Reach Out with 'Mystics'

Commentator and music journalist Ashley Kahn talks to members of The Flaming Lips about their music and their latest album, At War with the Mystics. For more than 20 years the band has been a cult favorite. Kahn explains how their new effort maintains a spirit of experimentation, while earning them a shot at mainstream popularity.

Unidentified Speaker: They're backstage and ready to go. Please help me welcome the cool, the crazy, the fabulous--Flaming Lips!

In 1994, the alternative rock group, the Flaming Lips, entered the pop mainstream after appearing on the T.V. show Beverly Hills 90210.

The FLAMING LIPS (Rock Group): (Singing "She Don't Use Jelly") She don't use jelly or any of these. She uses Vaseline...

MONTAGNE: That appearance helped raise the band above cult status, but its popularity never climbed much higher. Now, after major changes in personnel and in their sound, the Flaming Lips have a new album.

Listening to a Flaming Lips song is a bit like getting stuck between stations on the FM dial. Catchy melody...

The FLAMING LIPS: (Singing "Haven't Got a Clue") You haven't got a clue...

The FLAMING LIPS: (Singing) You don't know what to do...

The FLAMING LIPS: (Singing) You used your money...

Mr. WAYNE COYNE (Lead Singer, Flaming Lips): Hello, everybody. This is Wayne. I sing and blow up balloons for the Flaming Lips and this is...

Mr. STEVEN DROZD (Band Member, Flaming Lips): I'm Steven from the Flaming Lips and I play assorted instruments. We're all obsessed with any sound we can get our hands on, and so, you just pile a bunch of stuff on and see what sounds cool and what doesn't.

Mr. COYNE: Michael is, sort of, more involved in the, sort of, technical parts of it and...

Mr. DROZD: And then, live, we have a guy named Kliph Scurlock who's probably our biggest Flaming Lips fan I've ever met probably...

KAHN: In their 22-year history, they've evolved from a punk band to what they are today: a creative sound laboratory.

The FLAMING LIPS: (Singing "Free Radicals") You think you're so radical. I think you oughta stop. Say what!

KAHN: Coyne is the guiding force behind the Flaming Lips, which he founded in 1984.

Mr. COYNE: Couldn't play very well but we really wanted to do it all.

Mr. COYNE: Yeah, all this sort of junk, but still a lot of enthusiasm.

KAHN: Over the years, the Flaming Lips developed a cartoonish approach to songs and song titles. At times they could be outright avant-garde, like releasing an album on four CD's which were all supposed to be played at the same time.

KAHN: The new Flaming Lips album is a single CD. It's called At War With the Mystics.

KAHN: It's an album that should come with a seatbelt--a musical joyride that shifts track-by-track, from the punch of heavy metal...

The FLAMING LIPS: (Singing) You've got that (unintelligible)...

KAHN: To the sweetness of the 70's rock ballad.

The FLAMING LIPS: (Singing) They only see the obvious. They see the sun go down but they don't see it rise.

KAHN: What stands out most on this album, though, are songs that take a stand on today's political issues.

Mr. COYNE: We started putting this thing on that felt like it could be an absurd song--definitely pointed, if you so wanted to read it that way, into a political, sort of, George Bush bashing, if you could blow up the world with the flick of a switch, would you do it? Goes like this, right?

Mr. COYNE: (Singing "The Yeah Yeah Yeah Song") If you could blow up the world with the flick of a switch, would you do it?

Mr. COYNE: And then Steven says...

Mr. COYNE: (Laughs) (Singing) If you could make everybody poor just so you could be rich, would you do it?

Mr. COYNE: But I think as much as we're pointing it at George Bush, we also point it directly at ourselves, and I think what we learn from that is that you don't want to ever be given power. You want to earn it. You know, you think that having all this freedom and all this money and all this power, or you can do whatever you want, would be the best thing that ever happened to you--and it's not.

KAHN: The Flaming Lips' story is not complete without mentioning their legendary live shows.

The FLAMING LIPS: (Singing) Is this the real life? Is this just fantasy?

KAHN: Their concerts can include confetti and costumes, lots of balloons, and a moment of collective karaoke as the words to a well-known song by the group Queen are flashed on a huge video screen overhead.

Mr. COYNE: I beg the audience to just play along and as a group, we can all do this thing that really makes for a marvelous moment and we hope at a Flaming Lips show that we've just said, whatever you do in this room, you can do it here. We'll all look stupid together. All that what happens...

(Soundbite of the Flaming Lips and crowd singing "Bohemian Rhapsody")

KAHN: When Wayne Coyne tells his fans that he loves them, it's not the usual stage cliché. He means it. The Flaming Lips have been too long in the periphery of popular focus, and their new CD has all the elements to change that--hooks, lines and sirens.

MONTAGNE: Ashley Kahn is the author of the soon-to-be published 'The House That Train Built: The Story of Impulse Records.' The new Flaming Lips CD is 'At War With the Mystics.'

Wayne Coyne and The Flaming Lips 'At War'

Wayne Coyne and The Flaming Lips 'At War'

From 'At War with the Mystics'

Hear full-length cuts from the CD: 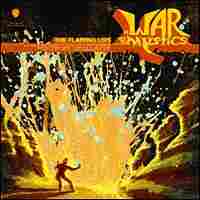 Cover for The Flaming Lips CD At War with the Mystics Warner Bros. hide caption

Independent music critic Christian Bordal chats with Wayne Coyne, lead singer of the iconoclastic rock group The Flaming Lips about their new CD, At War With the Mystics. Have these "purposely oddball" musicians gone mainstream? Listen for yourself...