The Notorious Bettie Page is a movie based on the life of the pinup girl whose legendary poses transformed her into an icon. Los Angeles Times and Morning Edition film critic Kenneth Turan calls it an "empty film." 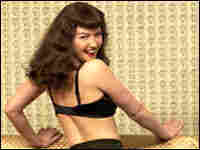 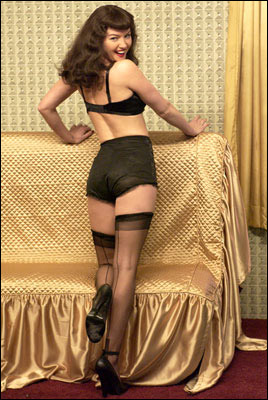 A new movie explores the life of Bettie Page, a model who came alive in front of the camera. She was a cult figure in the years after World War II, and even today her official website has gotten more than 600 million hits since the year 2000.

Los Angeles Times and MORNING EDITION film critic Kenneth Turan says the movie is not likely to be as popular.

Mr. KENNETH TURAN (Los Angeles Times Film Critic): Bettie Page really enjoyed posing. She brought a kind of incandescent delight to the job of being photographed in bathing suits or nothing at all, which makes it remarkable that the new film about her life and times, The Notorious Bettie Page, is so glum, joyless and devoid of emotion.

The film is directed and co-written by Mary Harron. It does capture the look of the period, and star Gretchen Mol capably counterfeits Page's exuberance.

Unidentified Man: (In Film) That thing just felt so inspiring.

Ms. GRETCHEN MOL (Actor): (As Bettie Page) I know exactly what you mean. It's like when you're in church.

Ms. MOL: Well, sometimes while they're preaching and they're singing and all, you get lifted up. Up out of yourself. It's like you're taken to another place.

Unidentified Man: Yeah, taken to another place. That's it.

Mr. TURAN: What Bettie Page doesn't have is a reason for being. Instead it holds events at the same kind of ironic distance that characterized Harron's earlier films, I Shot Andy Warhol and American Psycho.

The film starts with Page's hard times as a teenager in 1930's Nashville and details the sad events that put her on a Greyhound to Manhattan. Noticed on the beach by an amateur photographer, Page soon became a sought-after model, a good soul whose mottos were, What's the harm in it, and, I sure can try.

Unidentified Man #2: You okay, Bettie? The shoes hurting you?

Unidentified Woman: Can you (unintelligible) so we can see the stockings? Nice. Nice.

Mr. TURAN: Harron has said she was determined to be nonjudgmental about Page, to do justice to the woman's mystery and ambiguity. In practice, however, that attitude plays as coldness, and Page, for all her remarkable zest, comes off as a not terribly interesting person who couldn't be less involving.

While the film is ever-so-careful about its subject, it has no such scruples about the opposite sex. Most of the manipulative men in Page's life are venal creatures whose corrupting lusts taint everything they do.

Unidentified Man #3: You're a knockout. You're real star material.

Ms. MOL: You think so? I was awfully nervous.

Unidentified Man #3: We'll have to work on that accent of course, but it would be no fun if you were perfect. Say, why don't you have dinner with me tonight? I could give you a few pointers. We could get to know each other a little better?

Ms. MOL: I'm sorry, but I can't. I already have a boyfriend.

Unidentified Man #3: It's always an advantage to know the producer personally.

Mr. TURAN: The fact that the ethereal Page has the saint-like ability to rise above this makes its one-dimensional portrait of men even more irritating.

Page always saw herself as a religious person who occasionally mused, I don't know what God thinks about this. The film leaves her having a born-again experience and rededicating her life to Christ. While that addressed what was missing in Page's life, it's no help at all with what's missing in this empty film.

INSKEEP: Kenneth Turan is a film critic for MORNING EDITION and for the Los Angeles Times.