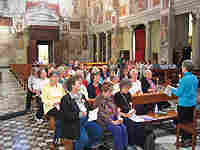 Inscriptions and images found on tombstones, frescoes and mosaics throughout the Mediterranean show that women held respected roles in the early Christian church that were identical to those held by men. They were apostles, priests, deacons and bishops.

But the Vatican's official view of church history presents women in a different light. Recently, a group of 31 American Catholic women, organized by the group FutureChurch, visited Rome to inspect the archeological evidence of female leadership.

Many who made the trip say they were inspired to become more active in their local church communities.

"We would just like to talk to our leaders," said Sister Christine Schenk, co-leader of the pilgrimage, "and tell them of our experience--how we can begin to re-institute that wonderful balanced leadership we had in the first three centuries of both women and men leading the communities." 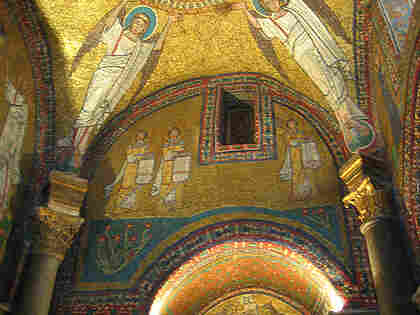 A mosaic of women who became saints after risking their lives to collect the relics of martyrs, St. Praxedes church, Rome. Sylvia Poggioli, NPR hide caption 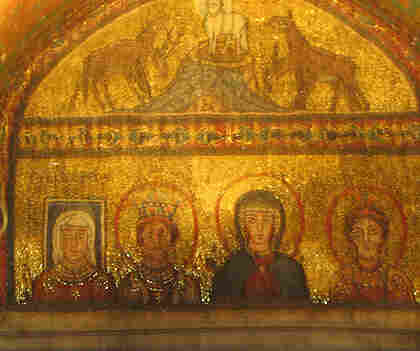 A mosaic in St. Praxedes church, Rome. Theodora is on the left with a square halo, indicating she was alive when the mosaic was made. Sylvia Poggioli, NPR hide caption