Accessibility links
San Francisco: Memories of an Earthquake The San Franciso quake of 1906 killed more than 3,000 people and sent tens of thousands on the run. Many of those were children, paired off with siblings, to find their way to safety. On the 100th anniversary of the quake, through letters and oral histories, a look at what the experience was like for those children. 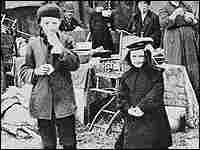 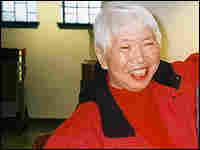 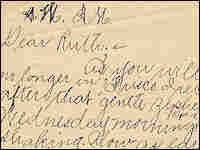 Elsie Cross, who was 12 when the earthquake struck, later wrote a detailed account to a friend. Courtesy California Historical Society Archives hide caption

Listen to oral histories of the 1906 quake:

Interviewed in 1956, courtesy of the Bancroft Library, UC Berkeley. Norris was a young woman at the time of the quake, living in Mill Valley, north of the city. When she refers to the quake of '68, she's talking about the 1868 earthquake, which at the time had been considered the "great quake."

Interviewed in 1980, courtesy of the Chinese Historical Society of America. Sung had just turned 7 years old when the quake hit. Her father was the first Chinese Presbyterian minister in San Francisco.

Interviewed in 1971, courtesy of the Bancroft Library, UC Berkeley. She was 11 at the time of the quake and remembers how her mother created a tent in their front yard.

Photographer Ansel Adams said the San Francisco earthquake remained his "closest experience with profound human suffering." Adams was just four years old, living on the outer most part of the city in 1906. He remembered falling against a low brick wall during a severe aftershock and violently hitting his nose. "My beauty was marred forever," he said.

Historical societies and libraries in California hold letters and oral histories from those who survived the quake. Here, a look at the earthquake through the eyes of some of the children who survived.

Letter to a Friend

As you will see by the heading I am no longer in Frisco. I received your postal the week after that “gentle zephyr” struck us. Ahem! Ahem!! Wednesday morning, April 18, I was awakened by a slight shaking. Now as earthquakes are usually gentle and mild I waited for it to pass away. Instead of that it began to wrench and by that time I was in my doorway. (That being considered the safest place.)

Then it began to just go up and down as a cat shakes a rat and I, thinking the world was coming to an end, said a prayer and waited for results. I saw my father in the front room try to get to my mother and also saw him thrown twice across the floor. I could see my mother and brother in the back room standing in their doorway. My brother could not stand so my mother had to hold him. And, Ruth, I laughed when it knocked our beautiful Regina down and it played Whistling Rufus all through the earthquake. Our chimney went through the basement, my bureau was thrown on my table and the drawers and their contents thrown on the floor. Things fell right and left, brick-a-brac flew around and the furniture danced a jig. As soon as it was over (and it only lasted 48 seconds) my father told us to dress as quick as we could and if another shake came, to finish in the street.

After we got out of the house my father said that the only trouble now was fire. All that day there were shocks and the sun was a ball of purple red from the smoke. It was very hot and you could hear building after building being blasted. People passed in all kinds of wagons and some on foot with what possessions they could take. I forgot to tell you that a house across the street was moved over nine feet and the house next to that went down in the earth 10 feet.

Elsie Cross was 12 years old at the time and living in the Western Addition, the same area as Adams. She had a friend named Ruth, to whom she wrote a detailed account of what happened in the early morning of April 18, 1906:

All that day there were shocks and the sun was a ball of purple red from the smoke. I was very hot and you could hear building after building being blasted. (People passed in all kinds of wagons and some on foot with what possessions they could take.) A house across the street was moved over nine feet and the house next to that went down into the earth 10 feet.

Elsie Cross wrote this letter from Oakland, Calif. (See more excerpts in the sidebar, left.) Her family must have taken a ferry boat to escape San Francisco, as thousands of others did. Her original handwritten letter was donated to the California Historical Society.

Margaret Sharp was 76 years old when she was interviewed in 1971. She was 11 at the time of the quake. What Sharp remembered the most was the tent her mother created in their front yard, which was near the entrance to one of the tent camps for the thousands left homeless. In an oral interview housed at the University of California's Bancroft Library, she describes her mother's attempt to help the homeless:

And then she pulled out some oriental rugs and several mattresses for the whole neighborhood and they all came there because no one would sleep in the house. And she brought the laundry stove out. So she ran what they'd call a soup kitchen now out there on the front for all these people who were straggling by with baby carriages full of their possessions. And it was two or three days after Easter and they'd have hat boxes for the Easter bonnets, probably the only thing they'd saved. And parrot cages. And all sort of conditions of things, the little boys' red wagon full of what they thought they could save and in the most outrageous costumes you've ever seen in your life because they just put on anything they happened to have over night clothes -– or just the first thing they picked up to get out of the houses.

Sharp and her family moved to the tent camp soon after, for safety. By the third day, the family managed to take the ferry to Oakland. They moved back to San Francisco 1 ½ years later.

Mrs. Samuel Haile was 10 in 1906. Her most vivid memory was the long, circuitous journey to escape the city, with her parents and five sisters, the youngest being 7 months old. Eventually, they made it to the Ferry Building:

Well here we were all cooped up and just mobs of people and we could look at the open doors toward Market Street and there was nothing but embers -– all of these buildings had been burned right to the ground, glowing. And I guess I must have gone to sleep because I don't remember crossing on the ferry. But when we got off the ferry to get onto the train, I looked out and I thought it was the end of the pier. It was all brilliant. Later on I discovered it was San Francisco burning. I mean it was two or three years before I realized that this is really what I was seeing.

Haile specifically remembered being exhausted for days afterward, sitting up and then just dropping fast asleep. Historians think her family did not move back to San Francisco. Haile's oral interview is held at the University of California's Bancroft Library

Lily Sung was just 7 years old at the time of quake. He father was the first Chinese Presbyterian minister in San Francisco. On that April morning, her father divided the family and neighbors into groups to escape the city. Sung's group consisted of her 14-year-old sister, 3-year-old sister and 5-year-old brother:

We had a neighbor with us. But she had bound feet, about 3 1/2 inches, and she couldn't walk very fast. There were crowds pushing us up along the street so we were pushed up the hill. We were supposed to go down to the ferry, but then there were so many people trying to get away from the fire, so they thought the thing to do was to go up. And sometimes it wasn't very easy to get around these places, the houses had all fallen down. We could feel the fire on our faces, even several blocks away. My sister tried to keep us away from the fire because we were walking so slowly because of this lady.

Part way, this lady fell against my sister, and she dropped the sack with the bottle of water, and the bottle broke, and the clothing was all wet, and the bread was all soaked. That was the first time I ever saw her cry, because she was responsible for us and here was the food and the water.

At nighttime we had no place to sleep or to rest. So I remember up around Taylor Street, we lay down. We couldn't really lie down, but we sat as well as we could. See, I had a little brother and a little sister, and they hung on tightly to me. And they were such good children. They didn't cry even when they were knocked down. I was seven. I felt quite responsible and quite a big sister. So they would not cry, but they'd look up tearfully at me and hold my hand closer. We three just held on to each other because we mustn't be parted from our big sister and from this lady.

It took them two days to get to the ferry building, which normally would have taken maybe an hour. They waited another day in line for the ferry. When they reached Oakland, they were met by the Red Cross and Salvation Army:

Sung was reunited with the rest of her family. Her father decided to move the family to San Rafael, north of San Francisco in Marin County, where the schools were integrated. Her interview, recorded in 1980, is courtesy of the Chinese Historical Society of America.

Milly Lee's mother grew up in Chinatown. Her mother was 8 years old at the time of the quake and never spoke of her experience until her granddaughter talked about a family camping trip, where they slept in a tent. "My mother very casually said, 'I've slept in a tent before.' And I said where? And she said Golden Gate Park, we were there for the earthquake," says Lee. "I never heard it until then." Lee wrote a children's book, Earthquake, about her mother's experience.