Accessibility links
Rock and the Reluctant Soldier Mixing rock, ska, and dance beats, the British band Hard-Fi recalls The Clash's ability to slyly protest the status quo in the context of infectious pop music. "Middle Eastern Holiday" adopts the perspective of a friend going off to fight in Iraq.

Rock and the Reluctant Soldier

Rock and the Reluctant Soldier

Mixing rock, ska, and dance beats, the British band Hard-Fi writes hooky songs that offer insights into the bleakness of working-class British life. Richard Archer's militant but pop-friendly vocal delivery recalls that of The Clash's Joe Strummer, with a similar ability to slyly protest the status quo within the context of infectious pop music. 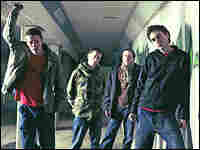 Hard-Fi takes a grunt's-eye view of the war in Iraq. hide caption

"Middle Eastern Holiday" adopts the perspective of a friend going off to fight in Iraq. Mixing evocative imagery ("Where bullet holes scar the minarets / smoke on the horizon, a beautiful sunset") and more pointedly articulated concerns ("Give me a gun / I hope I see my mum again"), the song paints the picture of a 21-year-old soldier who fears for his life.

Hard-Fi wisely keeps world events on a personal scale -- "I've got a girl, is she missing me? / Watching out for me on the news on TV" -- in the process bringing to mind the grunt's-eye view favored in some of the most effective songs from the Vietnam era. Later in "Middle Eastern Holiday," Archer gets more direct in his commentary: "In the desert, the fuse is lit / I'm the one who has to deal with it." It's not the first 21st-century protest song, but it could be the catchiest.