Accessibility links
America's History of Violins The violin takes center stage in an exhibit at the Library of Congress. The instrument's popularity has cut across economic, racial and regional lines and helped drive new forms of American music, from blues and jazz to bluegrass and swing.

The violin takes center stage in an exhibit at the Library of Congress. The instrument's popularity has cut across economic, racial and regional lines and helped drive new forms of American music, from blues and jazz to bluegrass and swing. 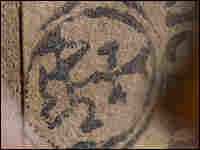 A label on the "Betts" violin from 1704, on diplay in the Library of Congress exhibit, bears violin-maker Antonio Stradivari's stamp and printed name. The violin takes its name from the 19th-century London shop where it was purchased. Michael Zirkle/Library of Congress hide caption 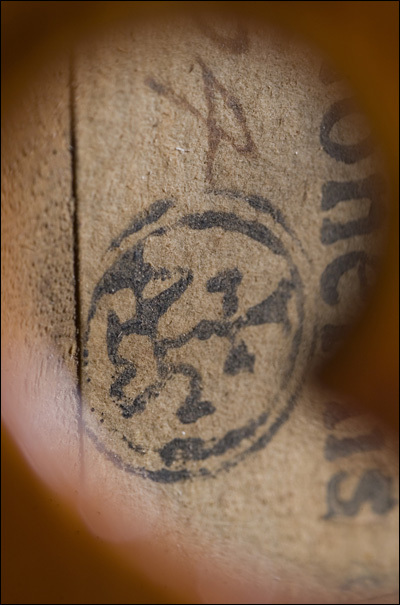 A label on the "Betts" violin from 1704, on diplay in the Library of Congress exhibit, bears violin-maker Antonio Stradivari's stamp and printed name. The violin takes its name from the 19th-century London shop where it was purchased.

It is often said that the violin sounds like a human voice. I think it sounds a lot like Patricia Neal and has womanly curves, albeit the big shouldered 1940's curves of Rita Hayworth. A lot of violin music is associated with plush drawing rooms, classical composers and concert halls. But since coming to America on somebody's shoulder, the violin has also made new friends. A new exhibit at the Library of Congress in Washington, D.C. tells the story of the violin in America, those who played them, those who made them.

DAVID SCHOENBAUM: I can't think of a more democratic instrument than the violin.

SIMON: Historian David Schoenbaum of the University of Iowa says the violin was practically a household fixture in America as far back as colonial times.

SCHOENBAUM: It's the most flexible of instruments and is appropriate to solo Bach and late Beethoven and equally appropriate to bluegrass and jazz of all imaginable varieties and funk (unintelligible).

SIMON: The first violins came from Europe. Cremona, Italy was home to the workshop of the Amati Family and two of their apprentices, Andrea Guarneri and Antonio Stradivari. Their violins, which are still being played today, are considered the best in the world. They used a soft, close-grained spruce for the belly of the instrument because they liked the way the wood held and sweetened the vibrations of the strings. They chose a harder wood for the backsides and neck of the violin, maple from the forests of Bosnia and Croatia. But violinmakers came to America too and the first American violin was probably made in 1759.

SIMON: In the Appalachian Hills of West Virginia and Kentucky, the violin became a fixture in the homes of farmers, who adapted it for their own music too. Here's a traditional American fiddle tune called Bonaparte's Retreat, played by Bill Stepp by the 1937 recording. A few years later, Aaron Copeland made it famous by adopting it almost note for note for his Ballet Rodeo.

(SOUNDBITE OF HERE COMES THE MAN WITH THE JIVE)

SIMON: Violins are still being made by hand in America. Because a maker spends so much time shaving, gluing, varnishing and practically caressing it before it comes to life, many who play it believe that each violin is invested with its own personality. Finding the right one can be as life-enhancing as finding the right love. Guy Rabut, who makes violins in Manhattan, says that he doesn't groan inside when someone who sits next to him on an airplane asks, And what do you do?

GUY RABUT: If you tell them you're a violinmaker, they are always fascinated.

SIMON: Mr. Rabut says that all the different kinds of music that have been developed since the 1600s may have increased the things a performer asks of his violin.

SIMON: Mr. Rabut came down from his violin workshop in Manhattan to the Library of Congress last week, along with scores of other violin and bow makers from around the country. He unzipped two of his violins from a padded black nylon case.

RABUT: This is the Bosnian Maple. Even the bridge is made from maple from Bosnia. The cutting of the bridges has traditionally been in France. This particular spruce is from the Valle de Siene(ph), which is the Italian Alps, and then the varnish is all varnishes that are cooked from the natural resins and oils and prepared in a traditional way.

SIMON: Mr. Rabut says it takes him about four months to make a violin from start to finish, from the design and woodcutting to the staining, gluing, and drying. He makes between five and ten a year. He says that American violin makers tend to know each other and often get together in meetings and sessions to speak what amounts to their common language of fingerboards, F holes, tuning pegs and tailpieces.

RABUT: It's a very different mindset that we function in as violin makers. There is something magical in a way about going into your little workshop, the alchemist's den, and creating these wonderful objects.

SIMON: Joel Smirnoff of the Julliard String Quartet played one of Mr. Rabut's violins for us and told us what he noticed.

JOEL SMIRNOFF: What we look for in instruments is, of course, a certain amount of volume, the evenness of the testators of the instrument. In other words that it has a bright top and a full bottom, because you want the traditionally feminine top of the instrument or birdlike quality and then a more masculine baritone for the bottom. And of course, you want the instrument to sound as vocal as possible. It should be a tenor, which is close to the human voice and variations of bow speed and bow weight are magnified by a great instrument. And what I like about this instrument by Rabut, is that it does have that quality about it. It will move with you.

SIMON: Mr. Smirnoff comes to Washington, D.C. several times a year to play one of the Stradivarius violins in the Library of Congress's collection. A great violin is not just meant to sit in a display case, but to be played and appreciated. We asked Joel Smirnoff to play something on Mr. Rabut's violin and then on a Stradivarius. He puts one of Mr. Rabut's instruments under his chin, breathes deeply and pulls the bow across the strings.

SMIRNOFF: Okay. You want to get the other instrument?

SIMON: Can you hear the difference?

SMIRNOFF: The process of aging somehow makes a violin a different, has a different quality about it. And some people actually think that the repair history of an instrument is a good thing. In other words, an instrument that has a few cracks in it, that has a sound-post crack in it that's been repaired, that these things actually help the sound of the instrument rather than hinder it.

SIMON: And the Rabut?

SMIRNOFF: Here's an instrument which doesn't have one crack, has no marks on it. It's a thing of beauty. I mean, I love looking at new instruments and I think this has the potential of being a very great instrument. It's different to play a new instrument because you have to give a little more. In other words, it doesn't bend with you as much because there aren't as many moving parts, you know, and the wood is thicker. Over the course of two, three hundred years the wood dries out and gets thinner and thinner.

SIMON: Guy Rabut believes that American violinmakers strive to duplicate the sound of the Italian masters more than the European makers. Italians and Austrians can trace an unbroken line to the earliest violinmakers and look for ways to break away, but Mr. Rabut says...

RABUT: I liken our heritage more to the orphan who didn't have parents. The American violin maker didn't grow from a tradition. We didn't have a direct connection with the birth of the violin. We went looking for a heritage. We went looking for our birth parents and we figured we might as well start with the best that we knew, which were the great makers of Cremona, the Amatis and the Guarneris and the Stradivari.

SIMON: Mr. Rabut has made instruments for members of the New York Philharmonic and other orchestras, but also a number of amateur musicians, albeit people who must be awfully serious about their hobby; his violins cost about $18,000.00. He gave the first violin that he ever made to his mother. A Stradivarius or Guarneri can be worth millions. There are only several hundred left and often collectors or corporations by them and lend them to a symphony violinist to use, which also increases their value. Guy Rabut says that a violin isn't a rare coin or a stamp. A violin in mint condition, untouched, untested isn't precious yet.

RABUT: The life of a violin begins in the hands of the musician. Until the musician places their bow on the string and starts to play, the violin is in preparation for life as a kind of gestation period. But there's nothing more gratifying than to see a violin in the hands of a capable musician or just someone who enjoys it and to see them play and make beautiful music and to know that hundreds of years from now, hopefully, long after we're all gone and nobody knows anybody, that someone is playing that violin.

SIMON: And who knows what kind of music they'll be playing then.