Accessibility links
Nuclear Weapons Not Appealing to All Countries Mitchell Reiss, author of Bridled Ambition: Why Countries Constrain Their Nuclear Capabilities, talks to Renee Montagne. They discuss why several countries, including South Africa, have abandoned their nuclear weapons programs.

Listen
Nuclear Weapons Not Appealing to All Countries

Mitchell Reiss, author of Bridled Ambition: Why Countries Constrain Their Nuclear Capabilities, talks to Renee Montagne. They discuss why several countries, including South Africa, have abandoned their nuclear weapons programs.

As Jason mentioned, South Africa is one country that actually possessed nuclear weapons. It then chose to give them up. Other countries, Brazil, Argentina, and South Korea, abandoned their nuclear weapons programs in the late 1980s and early '90s before getting the bomb.

For lessons these countries might offer in the current standoff with Iran, we turn to Mitchell Reiss, former Director of Policy Planning at the State Department under President Bush. He's written a book on why countries capable of making nuclear weapons decide not to.

MITCHELL REISS: At some point in time, each government in these countries made a fundamental choice; a decision that the future of their country was best served by abandoning their nuclear ambitions and integrating themselves more fully into the international system.

They trade a very narrow conception of power in the international system based on nuclear weapons for a much broader one based on economic integration and development that really brings them much more security in the long term.

MONTAGNE: Let's turn to South Africa for a moment. That country gave nuclear weapons up in the early '90s. There, they were facing a regime change, if you will; that is, a move from the apartheid government to black majority rule.

REISS: For South Africa, the security environment, it really transformed itself when the Soviet Union disappeared; it was much more benign. So, one of the original motivations for the weapons had really disappeared.

There was also a growing sense that these weapons really weren't good for anything. You couldn't use them against your external enemies because there really weren't very many, and you couldn't use them against your domestic adversaries because the white and black races were so close together. And, again, you had new leadership that had a fundamentally different vision of the future for South Africa and wanted to integrate it into the community of nations.

MONTAGNE: What lessons from the histories of these other countries might be applied to Iran?

REISS: The first thing you need to do is to--why they were originally interested in nuclear weapons? And, broadly, they fall into three categories: security reasons, reasons of prestige or status, and not to be minimized, bureaucratic momentum--scientists get bigger budgets, people get promoted, the military likes these programs. With the case of Iran, they're clearly are all three elements present.

MONTAGNE: It would seem, though, with other countries, that one lesson of the past is that there has to be a change in government.

REISS: The problem is, in Iran, is that the timeline for regime change, and the timeline for the nuclear program, play out very differently. And so, even if we can get a moderate, democratic regime coming to power in Tehran, it may not happen for many, many years. And, in the meantime, the Iranians could develop the bomb.

MONTAGNE: In what ways is Iran different from these other countries?

REISS: Iran believes itself to be the inheritor of a great culture, a great civilization: Persia. So, there is a sense of nationalism, a sense of cultural pride that believes that it deserves to have a seat at the top table and that nuclear weapons are part and parcel of what makes a great power.

In addition, it also believes itself to be in a tough neighborhood, to face security threats on its borders, to have a hostile relationship with the world's leader power, the United States, and therefore, have some real security concerns that need to be addressed.

And, therefore, the factors, the incentives, that some of these countries, like South Africa, Argentina and Brazil had, to integrate themselves into the community of nations, may cut the other way for the leadership in Tehran, and that's a particularly difficult conundrum; and I think you could make an argument that the Iranians can look to what India and Pakistan did in 1998 and what, more recently, North Korea has been able to do in terms of increasing its nuclear competence, (unintelligible) ask themselves what penalties have these countries really had to pay. That, in fact, they haven't paid very many penalties for this and, in some cases, they've actually been rewarded.

And so, yes, they're different. Each one is unique. But, again, the Iranians may feel that they're going through a particularly tough time right now. They simply have to brazen it out and that when they get to the end of the tunnel, they'll be fine and they'll be a nuclear weapons state at the same time.

MONTAGNE: Thank you, very much, for joining us.

MONTAGNE: Mitchell Reiss is the author of Bridled Ambition: Why Countries Constrain Their Nuclear Capabilities. He teaches international relations at the College of William and Mary. 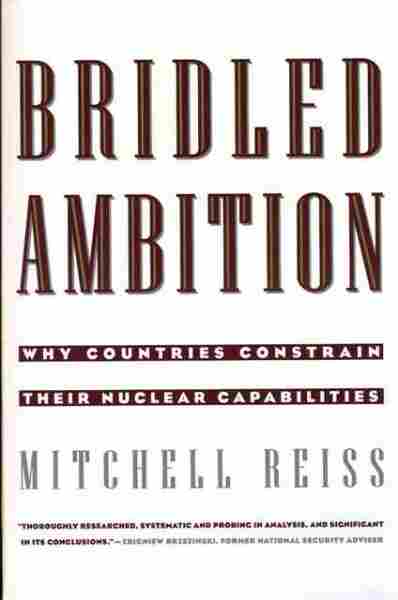 Why Countries Constrain Their Nuclear Capabilities