Accessibility links
Editorial Cartoonist Luckovich Nets a Pulitzer Melissa Block talks with Mike Luckovich, the Pulitzer Prize winner for editorial cartooning. Luckovich works for the Atlanta Journal Constitution; he is syndicated in papers around the country five times a week.

Melissa Block talks with Mike Luckovich, the 2006 Pulitzer Prize winner for editorial cartooning. Luckovich works for the Atlanta Journal-Constitution; he is syndicated in papers around the country five times a week. 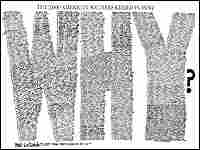 They discuss Luckovich's work, including his Oct. 26 cartoon in which the letters in the word "Why?" are formed by the names of 2,000 American soldiers who have died in Iraq. Luckovich won his first Pultizer in 1995.

In the notes accompanying the award, the Pulitzer panel cited Luckovich's "powerful cartoons on an array of issues, drawn with a simple but piercing style." Other finalists were Marshall Ramsey of The Clarion-Ledger (Jackson, Miss.) and Mike Thompson of the Detroit Free Press.

See the cartoons cited in the award

Public Service: The Times-Picayune of New Orleans and the sun Herald of Gulfport, Miss., for coverage of Hurricane Katrina

Explanatory Reporting: David Finkel of The Washington Post, for writing about the U.S. government's attempt to bring democracy to Yemen

Feature Writing: Jim Sheeler of the Rocky Mountain News, for his story on a Marine major who helps families of comrades killed in Iraq cope with their loss

Editorial Writing: Rick Attig and Doug Bates of The Oregonian for writing about abuse inside a mental hospital

Editorial Cartooning: Mike Luckovich of The Atlanta Journal-Constitution (Luckovich Featured on 'Talk of the Nation' Feb. 9)

Biography or Autobiography: Kai Bird and Martin J. Sherwin, American Prometheus: The Triumph and Tragedy of J. Robert Oppenheimer (Bird and Sherwin on 'Talk of the Nation' May 11, 2005)