Accessibility links
When States -- and Mayors -- Take Over Schools L.A.'s mayor wants control over the failing school district. History offers lessons for lawmakers on the benefits -- and pitfalls -- of stepping in and taking over.

When States -- and Mayors -- Take Over Schools

When States — and Mayors — Take Over Schools 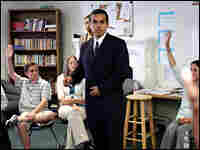 When public schools fail for years, or even decades, to meet the minimum requirements for educating their students, it's natural for politicians to want to step in and take bold action.

Two striking examples of this have occurred in recent days -- on opposite ends of the country.

In Maryland, the state schools chief, Nancy Grasmick, ordered new management at 11 Baltimore city schools and placed four high schools under state control. That move has been blocked for now by the state legislature.

This week, Los Angeles Mayor Antonio Villaraigosa is making his case for gaining control of his city's school district, the second-largest in the nation.

These efforts represent two prongs of a policy approach that’s been running through urban education for more than 15 years -- states taking over, mayors taking over. Each of these approaches has its own lessons and pitfalls for lawmakers and politicians who watch from the sidelines and think they can do a better job.

In many ways, a takeover by the state makes sense. After all, in the past half-century, states have contributed a growing share of the money that goes into local school districts.

New Jersey was first, seizing control of the Jersey City schools in 1989. In the next few years, more takeovers followed: New Jersey took over Paterson in 1991 and Newark in 1995. California seized control of Compton in 1993. By the end of the decade, nearly half the states had passed laws allowing state intervention in troubled districts.

But no sooner did some of these states get into the business of running a messed-up school district than they sought to get out. As it turns out, it's not so easy to manage hundreds of employees and educate thousands of children from far away in the state capitol. And often, people in those schools didn’t want them taken over. Residents of predominantly minority communities often resent what they perceive as meddling from legislatures dominated by white people.

And though it sounds appealing to "clean house" by getting rid of principals, teachers and administrators, it's not as if there is a pool of talented people just sitting around waiting to replace those who were dismissed.

As reporter Caroline Hendrie put it in an Education Week article in 1996, "In case after case, when state administrators have tried to elbow out local officials and run a failing district themselves, improvements have come at the heavy cost of lawsuits, bitter media battles and confused and angry teachers and parents.”

The recent proposal in Baltimore reflects this experience and illustrates the dilemma often facing state lawmakers. Some of these schools had been on a “watch list” of failing schools for decades, with fewer than 10 percent of their students passing the state algebra test.

Maryland has a long history of intervening in the district and involving local officials in the process. Instead of managing the schools from Annapolis, Grasmick’s plan called for hiring outside managers such as the for-profit Edison Schools to come in and run some schools -- an idea that has shown success in Philadelphia. Nevertheless, the Maryland takeover proposal set off a row in the city and quickly led the legislature to put a stop to it, even overriding a veto by Gov. Robert Ehrlich.

Once states got into the business of takeovers, a solution that quickly emerged was to hand the schools off to the mayor. Massachusetts led the way with Boston in 1991. In 1995, the Illinois legislature took over the Chicago public schools, transferring control to Mayor Richard M. Daley. Also that year, a federal judge declared the Cleveland schools "in crisis" and ordered the state to intervene. Two years later, the Ohio legislature turned the district over to the mayor. In 1999, the Michigan legislature replaced the Detroit school board with a seven-member board: six to be appointed by the mayor, one by the state.

In some ways, mayoral control has a lot going for it, both for the mayor and for the schools. Some urban mayors -- notably Richard M. Daley in Chicago and Thomas Menino in Boston -- saw clearly that the future of their cities depends on strong, thriving neighborhoods populated by a strong, thriving middle class. And they realized that the major factor influencing where such people choose to live -- the quality of the public schools -- was outside their control.

By taking over the schools, these mayors accepted responsibility and brought a new level of accountability to the process. If you don't like your schools, said Menino, then you know who to blame.

So How Are the Mayors Doing?

In Boston, Chicago and elsewhere, a pattern emerged. In general, the mayors have been able to use their political and executive authority to win some immediate victories. Often the first step -- a big one -- is getting the teachers on board. In Chicago, Daley and his team quickly cut a deal with the teachers' union, ending the crippling strikes that had virtually become a September ritual there.

The mayors have done pretty well in getting the books and infrastructure in order. They have cleaned up the finances and made sure that the toilets flush, the roofs don't leak and the textbooks show up on time at the start of the school year. That's no small accomplishment. In many of these districts, such seemingly obvious problems had gone unfixed for years.

But the real test is student achievement, and there’s little research so far to show how well takeovers work. Nevertheless, there's some evidence that the mayors have had some success.

In Chicago and Boston, a stable leadership and political clout helped get all the schools on the same page, and for at least the first few years, test scores rose, especially in elementary and middle schools. Philadelphia, too, has seen gains since the state stepped in five years ago.

But often the curve flattens out after a few years. And in high schools, which present perhaps the toughest challenge in urban education today, real success has proved much more elusive.

Maryland and Baltimore at Odds Over City Schools April 13, 2006