Listen
'Protecting Our Own': Blacks Sticking Together

Former Washington D.C. Mayor Marion Barry made national headlines in March when he was sentenced to three years probation for tax violations. That news paled in comparison to Barry's troubles 16 years ago. That's when the FBI videotaped him smoking crack cocaine during a sting operation. Yet voters, most of them African-American, gave Barry another chance and reelected him as mayor. Criminal law professor Katheryn Russell-Brown sees this kind of case as an example of what she calls black protectionism.

She details the history of this phenomenon in her new book, Protecting Our Own: Race, Crime and African-Americans. Here again is NPR's Farai Chideya.

Define black protectionism, perhaps through the lens of someone like Marion Barry.

With Marion Barry, many African-Americans had the very clear sense that the government was after him. And so, even though there were pictures of him, we had video of him on tape smoking a crack pipe--for many, the question wasn't whether or not he was guilty or not of that, but whether or not he had been set up, and was this part of a larger conspiracy to bring down famous African-Americans?

CHIDEYA: The title of your first chapter is Loving O.J. What about that case? Boy, the fires are still raging over that one.

Prof. RUSSELL-BROWN: Still raging 10 and a half years later. O.J. Simpson, a beloved Heisman Trophy winner, not necessarily, you know, central to African-American politics, or any of that. But for many African-Americans, he represents the pinnacle of success, of achievement.

And so when the charges came up, when the double murder case occurred, many were sort of waiting to hear what the evidence was, take a look at the case. But because there was a decided focus and decision by much of the media not to talk about race or to deny that race mattered, I think, for many African-Americans, that sent the signal, race matters. That something is going on here.

So, in some ways, in an odd twist, O.J. Simpson became almost like Emmett Till--became almost this symbol of justice gone awry, a system not working, even though, in fact, he was acquitted.

CHIDEYA: Given the flack that the black community got for the O.J. Simpson reaction, is black protectionism a kind of boomerang that comes back and hits the community in the head?

Prof. RUSSELL-BROWN: You know, that's a good question. I think that, for African-Americans, in some ways, it doesn't even matter what the larger society thinks about their response to particular criminal justice cases. For many blacks, they're--I like to say--one or two degrees of separation from someone who's involved in the justice system, whether it's a friend, a family member, an acquaintance.

The perception, the information, the reality of the criminal justice system is something different than for white Americans compared with black Americans. But you're right. There was this sense that, well, blacks are just defending O.J. because he's black. But I would maintain it had everything to do with a different take on the criminal justice system.

CHIDEYA: What are the benefits and the costs of black protectionism?

But I think there are some very acute costs to black protectionism. One of the concerns is that, does it apply to black women? Are black women able to get the same kind of protectionism that black men are able to receive from the community? And the answer appears to be no. Will be interesting to see how the Cynthia McKinney, Congresswoman McKinney's case plays out, because there actually aren't that many cases involving high-profile, African-American women who face criminal charges, or face serious charges.

But also, one of the questions that I asked in the book is whether or not it's in the community's best interest to apply protectionism in a knee-jerk fashion? I mean, does it help us to rally behind and support Clarence Thomas to the same degree that we would, say, Jesse Jackson? I mean, how does this move us forward? Also, what about black victims? I mean, we have the case involving, most recently, the Duke lacrosse team, a woman who says that she was sexually--a black woman who says she was sexually assaulted. Shouldn't we rally behind a sexual assault victim, whether it's, you know, the Mike Tyson case or this one, in the same way that we do for high-profile, celebrity African-American men?

CHIDEYA: What went on there?

Prof. RUSSELL-BROWN: Well, you know, it's interesting. I've talked to many people about this, and there seems to be this need, almost--just a real push to separate out R. Kelly the man from R. Kelly the musician. That, you know, you hear, well, I really like his music. That, whatever he does in his personal time--and we saw the same thing with Bill Clinton, who interestingly, though--obviously is not black, but he received the same kind of protectionism that we see in other cases.

CHIDEYA: In fact, in the introduction to your book, professor and author Derrick Bell cites what he calls, the unholy alliance of blacks with Bill Clinton. A lot of people would call that strong language. Does black protectionism extend to people like Bill Clinton who are identified with the black community?

Prof. RUSSELL-BROWN: I think so. I think Clinton's case is a clear one. I mean, Clinton had a very strong black block after the Monica Lewinsky case came to the surface. I mean, there's a strong love--and there has been and continues to be--for Clinton. I don't, however, think there are very many whites who could fall into that same category. So, I think really that Clinton is exceptional.

CHIDEYA: Finally, what about white protectionism? Does that exist?

Prof. RUSSELL-BROWN: Well, it exists, but it operates in a different way. I mean, we don't see whites rallying and saying that whites are being brought down or that kind of thing, but it exists in a way that we see how cases are handled. I mean, you see around the clock coverage for missing white teens or white murdered women. So, you see a different response to how victims, how offenders are treated who are white. But no, it doesn't have the label white protectionism, but it still ends up being a version of protecting our own.

CHIDEYA: Katheryn Russell-Brown is a law professor at the University of Florida. Her new book is titled Protecting our Own: Race, Crime, and African-Americans. Professor Russell-Brown, thanks for joining us.

GORDON: That was NPR's Farai Chideya. 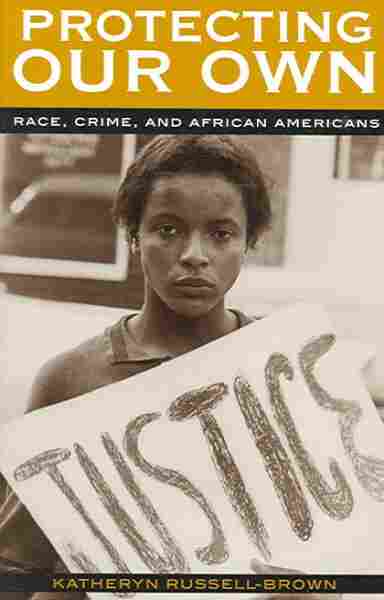