Accessibility links
Billy Bragg, Boxed for Posterity : World Cafe Billy Bragg has been one of England's most politically active singer songwriters since the early 1980s. He now celebrates his long career with a comprehensive box set, Billy Bragg Volume 1.

Billy Bragg has been one of England's most politically active singer-songwriters since the early 1980s. He has certainly made an indelible mark on the conscience of British music, becoming a guardian of the countrys protest-folk tradition that stretches back over the centuries. 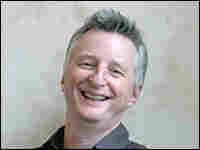 Throughout the 1980s, Bragg refined his catalog of folk-pop music and biting politics on such classic albums as Talking With The Taxman About Poetry. In the late '90s, he was selected by Nora Guthrie, daughter of American folk icon Woody, to take part in the Mermaid Avenue project with the band Wilco, setting Woody's unreleased lyrics to music.

Now, a comprehensive box set, Billy Bragg Volume 1, features a rich history of Braggs career from 1983-1990, in seven CDs and two DVDs. "It's great to have a box set," Bragg says. "I was determined to do something, you know, tactile, before buying music just becomes clicking with the mouse."