The Guillemots are an internationally diverse quartet begun by the classically trained British musician Fyfe Dangerfield. Bassist Aristazabal Hawkes is Canadian, the drummer Rican Caol is Scottish, and the guitarist MC Lord Magrao is Brazilian. 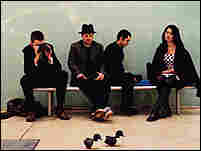 Each member brings a wildly diverse background to the group, with experience in genres ranging from classical to jazz to metal. Dangerfield's soulful vocals round out the eclectic mix.

The band opened for Rufus Wainwright on his 2005 tour, and their debut album was released this year, From the Cliffs.

Album
From the Cliffs
Artist
Guillemots