Accessibility links
Alzheimer's Drugs Offer Debatable Promise A decade ago, the best that doctors could offer Alzheimer's patients and their families was an early diagnosis. Today, doctors have four medications to offer, but there's no agreement on how helpful those drugs are. 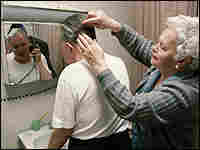 A decade ago, the best that doctors could offer Alzheimer's patients and their families was an early diagnosis. Today, doctors have four medications to offer, but there's no agreement on how helpful those drugs are.

None of the medications cure Alzheimer's. But slowing the speed of the diseases' deterioration of the brain is exciting enough to psychiatrist Gary Small, who directs the University of California, Los Angeles Center on Aging, and has done significant research in Alzheimer's medications.

"The families will come back and say the patient seems brighter, more independent," says Small. "They really notice differences in target symptoms."

Small says that after patients take medication for about a month, families report changes. One woman noticed her husband stopped asking the same question again and again, and seemed less agitated and irritable.

Another family noticed that dad would spend more time with the grandkids and would play pool more often with the family. Returning to these fun and familiar activities seemed to help him more.

There's a synergy, says Small, between getting back to a normal routine and the medication.

There are basically two classes of drugs now available. One includes three medications, sold under the brand names Aricept, Exelon and Razadyne. They work by bolstering a neurotransmitter in the brain that helps brain cells communicate.

"These drugs will increase the amount of that brain messenger or that brain transmitter, so that there's better cellular communication," says Small. "They actually benefit memory and other forms of cognition. There's been studies showing they'll even reduce the caregiver burden."

Both types of medication can be taken simultaneously, which can increase their benefit. But Small cautions that the benefit, while noticeable for certain patients and their families, is small.

Geriatric specialist Tom Finucane agrees. Finucane teaches at Johns Hopkins University School of Medicine. He says that although patients do improve on memory and cognition tests, the improvement is tiny, and most studies show no meaningful, practical change.

Finucane's patients and their caregivers haven't reported a difference, he says.

"There really is no difference between these drugs and placebo." And he's concerned that the cost -- which can be $150 a month -- just isn't worth it.

For his part, Small couldn't disagree more. Doctors have a responsibility to offer patients the best that's available, he says, and right now, that's one drug from each class.

More than 5 million Americans have Alzheimer's, but the number of lives affected is much greater. Most people with Alzheimer's are cared for at home by family and friends.

Many of them say they find caregiving rewarding, but many also say it can be difficult. People with Alzheimer's can have trouble with the basic tasks of life, such as eating, bathing and getting dressed. But the emotional impact of the disease is often what's most devastating for caregivers. People with Alzheimer's can be combative and have severe mood swings. Sometimes, they simply forget where they are and who they are.

In her book "Learning to Speak Alzheimer's," Joanne Koenig Coste talks about productive and simple ways to ease mood swings and anger in people with Alzheimer's, which in turn can ease the caregiver's stress.

"Aggressive behavior and angry behavior is a result of frustration," on the part of the person with Alzheimer's, Coste says. Their inability to communicate, as they search for words or are repeatedly told they're wrong, or their resentment over the limits placed on them by the disease, can trigger outbursts and mood swings.

It's a defense against a world they no longer understand, says Coste. That aggression can be lessened if caregivers try to see the world from the person with Alzheimer's perspective, Coste advises. So if a loved one who's confused thinks it's 1941 and Franklin Delano Roosevelt is still alive, it's okay to pretend FDR is still holding his fireside chats.

In the past 15 years, there has been an explosion in support groups, guides and adult day care centers, all of which work together to bring some respite as families adjust to the tough issues surrounding Alzheimer's. Find out more:

— The National Institute on Aging's Alzheimer's Caregiving Guide covers a wide range of topics, such as bathing, communication, home safety and choosing a nursing home.

— The Alzheimer's Association keeps up to date on the latest research and has extensive caregiver fact sheets, from sexuality and nutrition to recommended activities. The association also runs an excellent 24-hour hotline that provides practical advice and emotional support for caregivers.

— Minnesota's Geriatric Research and Education Clinical Center advice for caregivers talks about how to use body language to improve communication.

— The National Family Caregivers Association has 10 tips for how caregivers can take care of themselves.