Accessibility links
Paper on Israel Lobby Sparks Heated Debate When two prominent American professors published their research on the U.S. relationship with Israel, their conclusions set off a firestorm of debate. 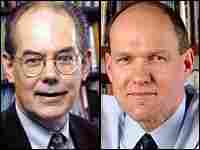 When two prominent American professors published their research on the U.S. relationship with Israel, their conclusions set off a firestorm of debate.

Mearsheimer and Walt's essay appeared in the London Review of Books on March 23. An unedited version of the paper is posted on Harvard's Web site.

John Mearsheimer, at the University of Chicago, and Stephen Walt, at Harvard, published their latest research on a Harvard Web site and in abbreviated form in the London Review of Books last month. The paper, titled "The Israel Lobby and U.S. Foreign Policy," is an extensive work, and the uproar it ignited hasn't stopped.

The key points of the paper can be summarized thus: U.S. support for Israel has been unwavering, but it is sometimes inconsistent with American interests.

Harvard law professor Alan Dershowitz submitted a 40-page reply to Mearsheimer and Walt in which he compared their study to The Protocols of Zion, a historic anti-Semitic slur.

The Response in the Op-Eds

Tony Judt, director of the Remarque Institute at New York University, published an opinion piece in The New York Times in which he says the essay raises "pressing" questions that have "nothing to do with anti-Semitism."

In an opinion piece published in The Washington Post, Eliot Cohen, a professor at the Johns Hopkins University School of Advanced International Studies, called Mearsheimer and Walt's conclusions "inept, even kooky academic work" and "anti-Semitic."

Read 'A Lobby, Not a Conspiracy' by Tony Judt
Read 'Yes, It's Anti-Semitic' by Eliot Cohen

The professors ask: Why has the United States been willing to set aside its own security to advance the interests of another state? Their answer is what they call "the unmatched power of the Israel lobby."

The authors state the lobby includes Americans in the Clinton administration, more in the Bush administration, along with Christian evangelicals, the American Israel Public Affairs Committee, even editors at prominent American newspapers.

The paper has set off a bitter and growing controversy, with name-calling and worse. Mearsheimer and Walt said they expected criticism, but are surprised the attacks have become so personal. Both men now say they do not want to comment on the air on their research but will debate it in print.

Charges of Bigotry and Sloppy Research

A chorus of critics have charged that the research is filled with sloppy scholarship and outright bigotry. Eliot Cohen, a professor at the Johns Hopkins University School of Advanced International Studies, says the article was anti-Semitic. "That's a controversial assertion that I'll stand by," he says.

For Cohen, the paper was an attack on American Jews.

"This was not an article about what America's policy should be in the Middle East. What it was, was fundamentally an attack on the loyalty of American Jews," Cohen says. He aired his opinions in The Washington Post.

"I resent it bitterly," he says, "because I've got a son who's a soldier in Baghdad dodging bombs for our country. To have anybody impugn my loyalty is just outrageous."

Harvard University and the University Of Chicago support Mearsheimer and Walt's right to publish. It's a classic case of academic freedom, say university officials, although Harvard's Kennedy School removed its logo from the essay's cover page online.

The Kennedy School invited Harvard faculty to comment on the paper. Among the many responses was a fiery 40-page critique by law professor Alan Dershowitz that compared the study to The Protocols of Zion, a historic anti-Semitic slur.

But there have been more substantive debates about some of the paper's most controversial claims. On terrorism, the authors write that "the U.S. has a terrorism problem in good part because it is so closely allied with Israel." And on Iraq, they argue that "pressure from Israel and the Lobby was not the only factor behind the decision to attack Iraq in March 2003, but it was critical."

Larry Wilkerson, former chief of staff for Secretary of State Colin Powell, says the paper does have flaws. But he has assigned it to his students at George Washington University and the College of William and Mary for discussion.

Now that those whispers have become a full-throated shouting match, what will students learn?

Ned Walker, president of the Middle East Institute and former U.S. ambassador in Egypt and Israel, says the paper has "a lot of holes." He says the analysis is flawed on the terrorism threat: It is not support for Israel that motivated Osama bin Laden to target the United States, Walker says. Rather, it was U.S. support for the Saudi government. Walker bristles at the notion that he or any other U.S. diplomat put Israel ahead of U.S. interests.

"I lived through all the history that these gentlemen write about, and I didn't recognize it, not from the way they described it -- and I was in government all this time," Walker says.

But Michael Scheuer says that Mearsheimer and Walt are basically right. A former senior official at the Central Intelligence Agency, Scheuer is now a terrorism analyst for CBS News. On an antiwar Web site, Scheuer wrote that every government tries to influence public opinion. Mearsheimer and Walt, Scheuer says, have described one of the most successful campaigns in the United States.

"They should be credited for the courage they have had to actually present a paper on the subject," Scheuer says. "I hope they move on and do the Saudi lobby, which is probably more dangerous to the United States than the Israeli lobby."

Mearsheimer and Walt are not experts on the Middle East. They are prominent foreign-policy analysts and theorists, and are considered A-list scholars. They specialize in explaining how international politics works -- which is why their latest research paper has received so much attention, including extensive debate in European and Israeli media.

"You can't imagine how pleased I was," Findley says. "I think I can pose as a foremost expert on the lobby for Israel, because I was the target the last three years I was in Congress."

Findley is a fierce critic of Israel's policy toward the Palestinians. Findley's lobby group, the Council for the National Interest, published a full-page ad in The New York Times calling for the Israel lobby to be brought under control.

But the debate sparked by the Mearsheimer and Walt paper may not be the type of rational airing of ideas that Findley and his group have called for, says Gideon Rose, managing editor of Foreign Affairs.

"Unfortunately, Mearsheimer and Walt stated their case so strongly and over-broadly that it has produced the foreign-policy equivalent of a cable TV shout fest," Rose says. "They charge dual loyalty, while others charge anti-Semitism -- and nobody gets educated on the actual issues involved."

If the intention was to kick off a debate, it certainly has -- a raging debate. A check on Google shows hundreds of postings on the topic.