Accessibility links
Backyards May Play Role in Climate Change More than 5 billion tons of carbon dioxide enter the U.S. atmosphere each year. Scientists in Baltimore are studying whether backyards help absorb carbon dioxide, and by so doing, slow the pace of climate change. 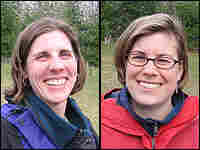 Researchers Ellen Schmitt, left, with the Institute of Ecosystem Studies, and Jen Jenkins, from the University of Vermont, are measuring how much carbon dioxide backyard grass takes from the air as it grows. Richard Harris, NPR hide caption 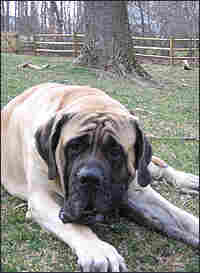 Dogs are presenting a challenge to Schmitt's and Jenkins' work. Dog waste fertilizes grass, making it grow faster. If the researchers only study yards with pets, their results might not accurately reflect what's happening in these ecosystems. Richard Harris, NPR hide caption

Each year, American tailpipes and smokestacks spew more than 5 billion tons of carbon dioxide into the atmosphere. About half of that stays in the air, where it contributes to global warming. The rest is soaked up by oceans, plants and soil. Scientists studying neighborhoods in Baltimore are now trying to figure out whether backyards are also helping absorb some of this gas, and by so doing, slowing the pace of climate change.