Accessibility links
FDA on Medical Marijuana: Science or Politics? The Food and Drug Administration declares that there is no medical use for marijuana. The determination returns the FDA to the middle of a politics vs. science battle. Researchers who believe marijuana has medical benefits say the FDA is trying to appease conservative legislators. 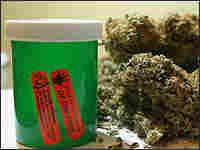 The FDA says there are no scientific studies supporting the safety or efficacy of marijuana for general medical use. Rod Rolle/Getty Images hide caption

The Food and Drug Administration has issued a statement saying there are no scientific studies to support the use of marijuana for medical purposes. But critics say the FDA is bowing to powerful political pressure.

The Drug Enforcement Administration (DEA) and the Office of National Drug Control Policy have long held that marijuana should not be legalized for any reason. And last year the Supreme Court ruled that federal authorities could prosecute patients taking medical marijuana in the dozen states that have approved its use.

FDA spokesperson Susan Bro said the agency issued its statement in response to inquiries from the public and Congress.

"For the FDA, there has not been enough clinical data demonstrating that either the drug is effective or safe in treating chronic, painful conditions," Bro said.

Marc White works for a member of Congress who has requested more information from the FDA, Rep. Mark Souder (R-IN). Souder opposes the medical use of marijuana.

"We've been asking them to look at the science of whether marijuana is really medicine for about three years, and asking them to weigh-in on it repeatedly," says White.

The Institute of Medicine, a division of the National Academy of Sciences, is already on record with its verdict. The IOM report was not exactly what White was looking for.

One of the authors of the IOM's 1999 study is John Benson, a professor of medicine at the University of Nebraska. "We thought there was sufficient evidence at that time to justify the statement that it had benefits in patients for pain, for the relief of nausea and vomiting from, for example, chemotherapy for cancer, or AIDS," Benson says. He adds that he's seen nothing since to contradict the panel's 1999 conclusion, though he is disappointed there haven't been more studies since then.

The IOM report was carefully worded. It focused on possibilities and noted that benefits had to be weighed against potential harm from inhaled smoke.

Opponents of medical marijuana, including Robert DuPont, drug czar in the Nixon and Ford administrations, point to the potential harm and say that without more solid proof of effectiveness, medical marijuana is a bad solution.

To Bruce Merkin of the Marijuana Policy Project, a pro-medical marijuana group, the FDA's decision had everything to do with pressure from Capitol Hill.

"This is not a scientific statement, this is a political statement. Nakedly, baldly political," he says.

Dr. Jerome Kassirer, a former editor of the New England Journal of Medicine, says it's motivated by a concern that smoking marijuana might lead to drug addiction.

"I think it's ridiculous. The fact is there are circumstances where smoked marijuana may be helpful to patients who are desperately ill," says Kassirer.

Whether it was politics or science that pushed the FDA, what happens next is not in the agency's hands, says FDA spokeswoman Susan Bro.

"That is the beginning and the end of what the FDA does," Bro said. "The enforcement of a product such as this is done by other agencies, such as the DEA."

Meanwhile, Souder will continue to ask the FDA to post more information on harmful effects of marijuana on its Web site. And U.S. Rep Maurice Hinchey (D-NY), who supports the use of medical marijuana, will send a letter to the FDA next week to find out why the agency apparently disregarded the Institute of Medicine study.